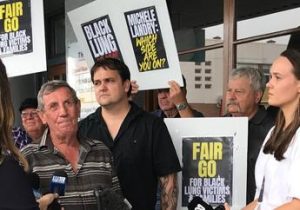 In a shameful milestone, over 100 Queenslanders have now been diagnosed with mine dust lung diseases such as black lung and silicosis – but their fight for justice is delivering results.

“Sadly, this is just the tip of the iceberg, and there are many more victims of mine dust diseases that we don’t even know about.

“Factors such as the use of labour hire firms, with employees cycling through different mining sites, and a fear among casual workers that they will lose their job if they are diagnosed, means that we are only scratching the surface of the mine dust disease epidemic.”

With more victims expected to be diagnosed in the months and years ahead, the Mine Dust Victim’s Group has been campaigning for a levy on coal production to fund long-term support for victims and their families. 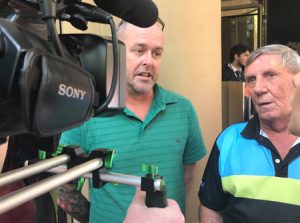 In February, victims and supporters travelled to BHP’s head office in Melbourne to bring their message to senior executives. BHP is the company with the most cases of employees diagnosed with dust disease to date. Unfortunately, BHP chose not to meet them.

Victims are seeking a levy of 1c per tonne per week on Queensland coal production.

Victims’ advocate Jim Pearce – a former coal miner and Queensland State MP – said mine dust victims would not accept being ignored by the mining corporations.

“These companies reap enormous profits from the labour of their workers,” Mr Pearce said.

“In fact, BHP made a staggering $12.2 billion profit in 2018. Despite this, BHP does next to nothing to support employees who contract potentially deadly and debilitating mine dust diseases while working in their mines.

“Frankly the Big Australian is behaving like the Ugly Australian.”

Travelling to the Melbourne rally from his home in Mackay, black lung sufferer Steve Mellor said victims were not provided adequate medical treatment in Australia. “They don’t treat us,” he said. “They just tell you to go away and die. 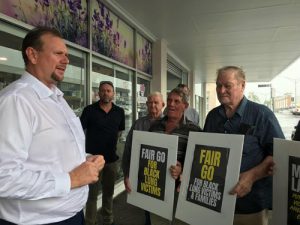 Support for an industry fund for black lung victims is gaining traction, with Labor candidate for the Central Queensland seat of Capricornia and coal mineworker Russell Robertson calling on big mining companies to pay up.

“As someone who has worked in the coal mines for the best part of my life, I won’t stand by while these good men and women suffer,” he said.

“These people are now suffering simply because they went to work, did their job and helped support these multinational mining companies make their mega profits.

“That’s why I am publicly calling on the resource industry to put their hands in their pockets and support those who contracted the Black Lung disease while working in their industry.

“All options to provide this support must be looked at including placing a small levy on each tonne of coal.”

Meanwhile, pressure from the Union and victims has resulted in a number of commitments from the Queensland Government to improve dust management and diagnosis, including lower allowable levels of respirable coal dust and silica in coal mines, independent dust testing and mobile screening units to improve workers’ access to specialist medical attention.

“The Queensland Government inherited a flawed system that has let coal mineworkers down and I commend the action they are taking,” said Mr Smyth.

“But there is always more to be done. We go to work, not to die. We won’t rest until we are confident coal mineworkers have the best possible protection and support.”