“We are coal miners” – Hitachi field crew win their fight 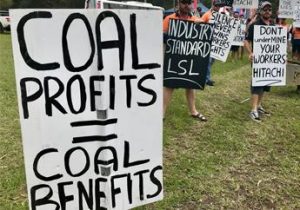 CFMEU members at Hitachi who service equipment in Hunter Valley coal mines have won employment entitlements that reflect the real conditions of their work.

After 12 months of negotiations and over six months of industrial action, tradesmen at Hitachi’s Muswellbrook depot have voted up a new enterprise agreement that reflects coal industry conditions, with significant improvements in pay, accident pay and a range of allowances.

It includes a pay rise of more than 17% over four years – including annual pay rises and improved night shift, tool and travel allowances; and increased accident pay to match the Black Coal Mining Industry Award.

The new agreement clarifies allowances that have previously been inconsistently applied, including paid meal breaks and travel times. The CFMEU made an application to the Fair Work Commission over unpaid travel time, which will result in tens of thousands of dollars of backpay for some workers.

At stake in this dispute was Hitachi’s refusal to recognise the field service fitters and electricians as coal mineworkers, even though they work in coal mines maintaining coal mining machinery.

“All we wanted was our proper entitlements,” said Ken Porthouse, Vice President of the newly established Hitachi Muswellbrook CFMEU Lodge. “We work in coal mines every day and we knew we weren’t getting a fair deal.”

Before going on strike, CFMEU membership at Hitachi grew from about 15 to over 50, giving workers confidence that if they stuck together, they could win a better deal. 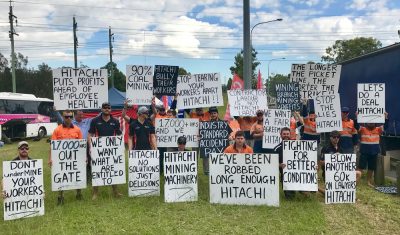 “We have a young workforce, many had never been in a union before let alone taken industrial action,” said Ken. “Now, the young guys have realised that they have some power, they have a voice. That’s what it’s all about.”

Workers started taking industrial action in June including stoppages and work bans. In November, they took their picket line down to Hitachi’s Sydney headquarters to get the attention of senior executives who were refusing to meet with them. CFMEU Northern Mining and NSW Energy District President Peter Jordan said mining industry employers would always look for ways to drive down wages and conditions.

“Our members at Hitachi show that workers using their collective power to fight back can win. They knew they weren’t getting a fair deal, so they got organised, stood up and did something about it.

“I congratulate our members at Hitachi for this outcome. If you work in a coal mine – whether you’re a contractor, labour hire or a permanent worker – you deserve the same entitlements as the person next to you.”