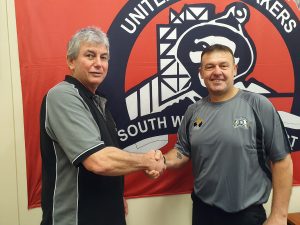 Our South Western District has farewelled Secretary Lee Webb who retired this month, with Andy Davey elected to replace him.

Lee Webb has been in the Secretary’s chair for four years, after a long career as a coal miner and union rep. An electrician by trade, Lee started his working life overhauling mining vehicles and equipment. He went underground after applying for a job at Tahmoor mine in 1986, where he stayed until becoming a full-time district official in 2015.

At Tahmoor, Lee quickly became the shift rep on afternoon shift – keeping the position for 16 years until he changed shifts. He later became Lodge Vice President, then Lodge Secretary, before putting his hat in the ring to become District Secretary.

Lee was a stalwart at Tahmoor during years of upheaval, including major industrial action. “We had at least seven companies running Tahmoor during my 28 years there, and when Xstrata turned up, they were the worst. Everyone hated this company with a passion, none more than myself.”

Andy Davey has worked in the coal industry for 25 years – including seven years and 18 years at Helensburgh, which is the oldest continuous coal mine in NSW. Andy has been a staunch unionist during his time in the industry, serving eight years as Helensburgh Lodge President and five years on the District Board of Management.

He hopes to build on Lee’s work strengthening governance and compliance in the District, improving communications to members and reaching out to younger members.

On behalf of the whole union, congratulations to Andy and many thanks to Lee for his years of service, we wish him all the best in retirement.