Hold the presses. BHP has discovered that in a changing world, having the support of the communities it operates is key to its business success.

In a scene straight out of Utopia, BHP’s top spin doctor told an investor briefing in London last week that “We are moving from a position of maintaining ‘a social licence’ to creating ‘social value’.

“In order to deliver financial value, you have to deliver social value,” said Geoff Healy, Chief External Affairs Officer (aka Captain Obvious). “The two are completely intertwined. This is just good sensible business.” 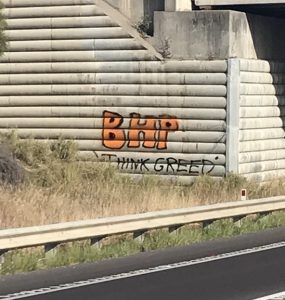 For a start, we would question how BHP is going with its social licence, judging from a spate of graffiti appearing in the Hunter Valley around its massive Mt Arthur coal mine. And when it comes to ‘social value’, BHP is making a mockery of the term with its new Operations Services employment strategy.

Creating a dodgy shelf company to employ a cut-price workforce at up to $50,000 a year less than existing workers on site agreements is literally ripping money out of the coal mining communities that BHP relies on.

BHP is cynically positioning Operations Services jobs as an improvement on the casual labour hire jobs that have become widespread in the industry. That’s debatable, as many of the contracting companies offer better rates of pay than Operations Services. BHP isn’t even prioritising long-term casual labour hire workers on its sites for the OS roles. However, it’s true that permanent jobs are sought after by workers who have been exploited as casuals over many years.

But let’s not forget that BHP was an industry leader in outsourcing permanent jobs to casual labour hire jobs. Worldwide, almost 60% of BHP’s workforce is contracted out. But there is nothing ‘traditional’ about contract labour hire. It is the result of a deliberate strategy by BHP to cut its wages bill over the past five to 10 years. It has delivered widespread community misery, with families unable to take out home loans and workers unable to take annual leave.

The traditional jobs that mining communities want and deserve are permanent jobs under union-negotiated site agreements. These agreements are the result of mine management and workers cooperating over many years to develop agreements that reflect the harsh conditions coal miners face and the big money mining companies make.

He revealed that BHP is using polling in its Australian mining communities to identify issues of concern.
I think we all know how to simplify things for him: the real social value BHP delivers the communities it operates in is through creating good, well-paid jobs. This is the tradition that coal miners have fought for over many years. If BHP is serious about winning and maintaining support in mining communities, it should immediately set about rebuilding its permanent, directly-employed workforce.