Certainty in short supply as closure looms at Liddell 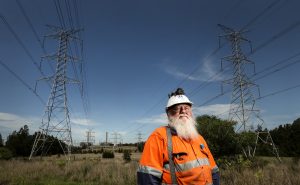 AGL’s Liddell power station in the Hunter Valley is the next coal-fired power station slated for closure and workers are getting used to the stream of politicians stopping by.

“They all want a photo with the power station in the background,” says delegate Wayne Smith. “They don’t come and talk to us though.”

While debate continues over the future of Australia’s oldest coal-fired power station and potential uses of the site, the Union’s priority is making sure workers and the local community are looked after.

Certainty is in short supply for workers as they negotiate a new enterprise agreement – most likely their last. A four-year agreement beginning in January would run through to Liddell’s closure, if current plans don’t change.

In 2015, AGL announced Liddell would close in 2022, having reached the end of its technical life after 50 years. This year, AGL announced that one unit would close in April 2022, with the remaining three units to remain in operation for an extra year until April 2023 to meet energy needs over the following summer.

There has been a public tussle between AGL and the Federal Government over further extending the life of the power station, but AGL insists it just doesn’t stack up.

“Workers are looking for fair treatment and for certainty, so they can plan the next stage of their lives, whether they are staying in the industry or moving on.”

Nearly 600 workers at Liddell and neighbouring power station Bayswater are covered by a common Enterprise Agreement.

AGL has made a commitment that the closure of Liddell will cause no forced redundancies. Instead, voluntary redundancies will be opened to workers across both power stations so that those who are ready to retire or move on can do so and positions open up at Bayswater for those workers from Liddell who wish to remain in the industry.

There are plenty of older workers who have had long, satisfying careers in the power industry who will take the opportunity of Liddell’s closure to call it a day, says Mark. At the same time, many younger workers are keen to continue in the industry, knowing they won’t match the pay and conditions in any new projects that may be developed at the site after the power station is decommissioned.

The CFMEU is working closely with community stakeholders to make sure community interests are protected in the closure. While AGL has made the right noises, they will need to be held to account over the next few years to make sure they follow through, says District President Peter Jordan.

“How AGL manages this closure will have a big impact on the community. They can do it in a way that creates work and community benefit or they can just cut and run.

“For example, work generated such as site rehabilitation should be performed by the existing workforce and not just contracted out.”

Wayne Smith began his working life at Liddell after starting in 1979 and he’ll finish it there. “When the last unit is decommissioned, they can decommission me too. I’ll retire,” he says. In the meantime, workers are worried about how the energy they produce will be replaced in the grid – “we are running hard til after midnight every night” – and maintaining good jobs and conditions through to the end.

There has been a steady rate of contracting out and casualisation of jobs at Liddell in the lead up to the closure.

“They say it’s because they don’t know what to do with people when it closes,” says Wayne. “But there will be plenty of work if decommissioning goes ahead and other opportunities within AGL.

“There are a lot of people here with valuable, specialist skills and they deserve certainty and job security.”