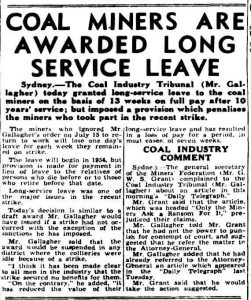 Seventy years ago this week, the first long service leave scheme for Australian coal miners was established – based on time in the industry, not time with your employer.

Born out of the bitter seven-week coal strike of 1949, the Coal Industry Long Service Leave scheme was the first scheme in Australia for blue collar workers and remains one of the best in the world.

Long service leave as a standard work condition was one of three key demands of the coal strike led by the Miners’ Federation, along with a 35-hour week and a 30-shilling pay rise.

The strikers came under attack by the Labor Government of the day, led by Prime Minister Ben Chifley, which passed laws making it illegal to give financial support to striking miners and their families. Union officials were arrested and troops used as strikebreakers in coal mines.

Shortly after the strike ended in August 1949, the Coal Industry Tribunal granted coal miners 13 weeks’ long service leave after 10 years’ service, though chairman Frank Gallagher was keen to point out that the strike had no bearing on decision. “I think it has been made clear to all men in the industry that the strike secured no benefits for them,” he said. (The Union has a different take to that of the Chairman!)

The fund was originally paid for by an excise on coal, based on tonnage but has since changed to a levy on relevant industry employers based on wages.

Unions have won significant improvements over the years, including reducing the qualifying period from 10 to eight years and recognition of breaks in continuity of service.

The scheme has also faced serious challenges, the most threatening under the Howard Government’s WorkChoices laws when long service leave was removed as an ‘allowable matter’ in relation to federal awards in 2006. This would have meant that if you didn’t have long service leave in your Enterprise Agreement, you wouldn’t get it. 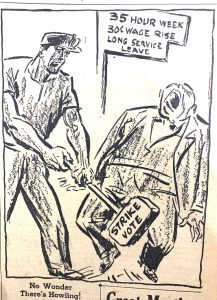 Some major coal employers led by Rio Tinto took the opportunity to advocate for the scheme to be abolished, especially the portable nature of it, and handing back funds to employers.

The Union launched a vocal campaign to save scheme, gaining a commitment from Labor to maintain and strengthen it, which they did after winning office in 2007.

In 2009, contractors and labour hire workers gained access to the scheme for the first time.

The CFMEU took part in a working group of coal employers and unions that delivered the Coal Mining Industry (Long Service Leave) Legislation Amendment Act 2011. The new legislation ensured that leave entitlements were preserved and guaranteed by Commonwealth legislation outside the Award. It reinforced that the minimum of 13 weeks after eight years was a legal entitlement that could not be traded away and restored historical coverage of all employees in the black coal mining industry, meaning that even if employers don’t identify as coal mining companies they must contribute to the fund if they have employees that work in mines doing mining work. “It is a very important entitlement that is available to all workers in the industry, whether they’re full-time, part-time, casual, contract or labour hire.

“But employers are always looking for new ways to wind back conditions.

is a move to narrow the scope of the Black Coal Mining Industry Award by excluding some contractors, which would also mean that those contractors would not have to contribute to the long service leave fund,” Grahame said.

“Everyone who works in a coal mine should get coal mining conditions and that includes long service leave. We will continue to fight for coal long service leave that is national, portable and available to all workers.”