Volume up, prices down: the outlook for export coal

Australia is the largest exporter of metallurgical coal in the world; and the second largest exporter of thermal coal. Latest government data forecasts that prices for both products will decline in the short-term, but increased volume means they will remain substantial earners.

The latest Resources and Energy Quarterly released by the Department of Industry, Innovation and Science, gives an overview of the major markets for our export coal and factors that impact on price and production. 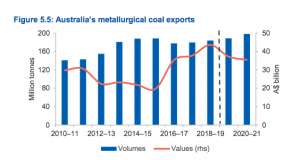 Volumes of metallurgical coal are forecast to grow from 183 million tonnes in 2018-19 to 198 million tonnes in 2020-21. This reflects production growth from mine restarts and new capacity in the Bowen Basin including Cook, Baralaba, Byerwen and Gregory Crinum.

However, prices are declining due to a deteriorating global economic outlook and weak steel production. The premium Australian Hard Coking Coal spot price was an estimated average of $US167 a tonne in the September quarter (with a low of $141 a tonne in late September), this was 18% lower than the June quarter and 13% lower than last year’s September quarter.

Australia is dominant in the production of metallurgical coal for export, accounting for more than half of all export coal produced globally. India currently accounts for 26% of Australian earnings from metallurgical coal, followed by China at 23% and Japan at 18%.

This means our industry is vulnerable to political and economic – even weather – changes in these countries.

For example, India’s steel imports slowed ahead of its May general election as infrastructure investment stalled and recent monsoon rains have also affected steel demand. Chinese imports are expected to drop sharply towards the end of the year as ports reach annual import quotas. In Japan, an end to construction for next year’s Tokyo Olympics has seen demand for steel – and metallurgical coal – decline.

In the years ahead, demand from India is expected to grow as it takes over from China as the world’s biggest importer of metallurgical steel by 2021. India has limited domestic reserves of metallurgical coal and will need to increase imports to support rapid growth of its steel sector and meet rising consumption.

Lower prices mean Australia is not forecast to repeat the record 2018-19 export earnings of $44 billion from metallurgical coal in the near future, even with higher volumes. But with earnings forecast of $37 billion in 2019-2020 and $35 billion in 2020-21, metallurgical coal is set to remain an extremely valuable and important export industry. Together with thermal coal it is second only to iron ore as Australia’s largest export earner. 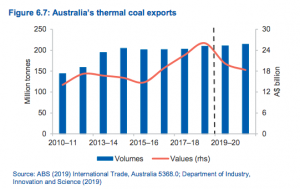 Australia is the second largest exporter of thermal coal in the world, after Indonesia. In 2018-19, Australia exported 210 million tonnes, worth a record $26 billion. In a similar story to metallurgical coal, volumes are forecast to increase over the next two years – up to 214 million tonnes in 2020-21 due to recovery from various disruptions and some new capacity.

Japan is by far the most valuable market for Australia’s thermal coal, accounting for 45% of export earnings, followed by China at 16% and South Korea at 15%. Chinese imports have been affected by customs clearance delays and are expected to be affected by increased domestic coal production. Japan’s overall imports have declined slightly year on year and Australia’s share has declined as Japan bought more thermal coal from Canada, Russia and the United States. In the short-term, maintenance taking some nuclear reactors offline is expected to bolster imports of thermal coal, but as with South Korea, Japan is expected to gradually move away from coal-fired power over the longer term.

India, which accounted for just 1% of Australia’s export earnings from thermal coal in 2018-19, is forecast to substantially increase its thermal coal imports in the years ahead to meet the needs of its rapidly growing population and economy. Coal is expected to remain part of India’s energy mix for years to come, although demand for imports will depend on the pace of domestic thermal coal production, which currently meets about 80% of requirements.

Southeast Asia is expected to become a more significant importer of thermal coal as the only region in the world where coal’s share of power generation is growing.

Despite the decline in prices meaning last year’s earnings record won’t be matched, export thermal coal will continue to be a major money-spinner for Australia with forecast earnings of $18 billion in 2020-21.