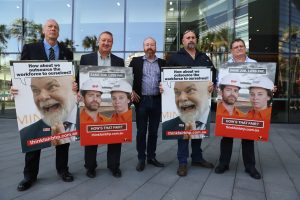 BHP has suffered a setback in its efforts to ram through substandard Enterprise Agreements covering thousands of Operations Services (OS) coal miners without bargaining with them.

The full bench of the Fair Work Commission agreed with the CFMEU that BHP hadn’t demonstrated genuine agreement by workers or proved its two EAs left OS workers better off overall than the Award, quashing their approval.

While BHP has another opportunity to have the agreements approved, the recent decision was an important win for the Union and puts OS workers a step closer to improving their pay and conditions by bargaining with CFMEU representation.

National Legal Officer Eliza Sarlos said BHP had made a mockery of the enterprise bargaining process by ‘negotiating’ the OS agreements with just a handful of iron ore workers in the Pilbara.

“Those agreements would cover over 2000 workers, with OS now scaling up significantly and providing labour across its east coast coal operations,” she said.

“They are paid as much as $50,000 a year less, with a significant loss of conditions such as accident pay.”

The Fair Work Commission decision overturns a previous decision in December to approve the agreements. Applications by BHP to have the Agreements approved will now be reheard. If the Agreements are rejected again, it gives an Operations Services workers an opportunity to engage in genuine bargaining for new Enterprise Agreements, with Union representation.

“It’s not enough just to be given a nice BHP shirt and told you’re part of the team if you’re not given BHP pay and conditions or even the chance to bargain for them.

“Operations Services is a strategy dreamt up by BHP executives to drive down wages and conditions in mining by employing people on non-union agreements through an in-house labour hire provider.

“Our message to Operations Services workers is that you deserve better. You deserve to be paid and treated the same as the people you work alongside and that includes the right to bargain for a better deal.”