Every member of our Union should be enormously proud of our big court win for casuals in the matter of WorkPac v Rossato. This is a decision that has deeply rattled employers because it is a fatal blow to the ‘permanent casual’ business model they have been using for years to rip off workers, especially in coal mining.

Our legal wins first in WorkPac v Skene then WorkPac v Rossato were a big investment by our Union and took many years of work to achieve. But the principle they have established in law is a common sense one that will substantially improve job security across the workforce. 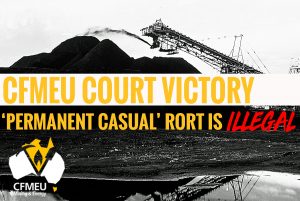 If you were to ask the average person in the street “what is a casual employee” the answer would be pretty consistent. Most people would regard casual employment as a mode of engagement where there is no ongoing expectation of work. Casual work is intermittent, unpredictable, irregular – the opposite of permanent.

This is not rocket science, or high-brow legal theory. In fact, the layperson’s definition of casual employment pretty much lines up with how the Courts have now defined it.

Both Paul Skene and Robert Rossato were employed as mineworkers by the labour hire company WorkPac as “permanent casuals”. For all practical purposes, they were indistinguishable from the permanently employed mineworkers they worked side by side with. The only difference being they were labelled as “casuals”.

Following the decisions of the Federal Court in Skene and Rossato there has been a hysterical over-reaction by big business and the labour hire industry. The reason is that the court rulings have exposed an exploitative business model that involves labour hire companies supplying “casual” employees for years on end at a substantially lower rate of pay than the direct employees of the client company that these workers work side by side with. Along with the lower rates of pay – 30 to 40% less than most established enterprise agreements in the coal industry – these “permanent casuals” do not get sick leave, or annual leave and can be sent home without pay whenever there is a disruption to production, such as wet weather. It is a great way for multinational mining giants to improve their bottom line.

One of the furphies that has been peddled by the big business lobbyists since the Skene decision is that there has been “double-dipping” because casual workers are already paid a “casual loading” to compensate them for foregone conditions such as annual leave. This is plain wrong.

In the Skene and Rossato cases the court found that there was nothing in his flat rate of pay to indicate that it contained compensation for casual employment. In other words, there was no identifiable casual loading. But equally, from a real-world perspective, these workers were paid far less than the permanent employees they worked side by side with, even taking into account their flat rate of pay and had no right to annual leave or sick leave. In which universe is that double-dipping?

Until these Federal Court judgments, fought for by our Union, there was no legal barrier to companies employing workers on permanent casual arrangements.

With employers now screaming blue murder, Industrial Relations Minister Christian Porter has announced he will consider amendments to the Fair Work Act to allow the practice to continue. The big business lobby wants the Government to effectively endorse a sham and allow employers to legally label someone as a casual, regardless of the objective reality of their employment relationship.

To embark on this course would be to betray the many thousands of casual coal miners who have been exploited and treated as second class citizens. We will be using every avenue at our disposal to oppose legislative changes that would undermine the impact of the important Skene and Rossato judgments.

Mining companies are tough opponents and we know that to achieve lasting change we need to fight and fight again. But let’s take a moment to reflect on our important achievement in changing the law. I’d like to thank Paul Skene, our labour hire member who took the fight up to WorkPac, our great legal team and every CFMEU Mining and Energy member – it’s your commitment to collective action through the Union that has delivered this win.