The many colours of hydrogen . . . and what they mean for coking coal So you thought hydrogen was an invisible gas? Well you’re right, but it’s colour-coded when discussed as an energy technology. And it may sound mysterious, but it has implications for the future of coking coal in steelmaking. So – it matters for mining jobs.

Hydrogen is the lightest of the gases and does not occur naturally in large quantities. But it can be made by breaking down more complex substances.

It is widely touted as a solution to the need for a flexible fuel that is low emission – because when you burn hydrogen it combines with oxygen to form . . . . water.

The most common – and cheapest – type of hydrogen we have now is “grey” hydrogen – it is made from methane, otherwise known as natural gas. The next is “brown” hydrogen – made from oil or coal.

The problem with hydrogen from these sources, from an environmental viewpoint, is that a lot of carbon dioxide is released in the production process. That, it contributes to global warming. So the next way hydrogen can be produced is from gas, coal or oil, but with the use of CCS (Carbon Capture and Storage) technology so the emissions don’t enter the atmosphere. This gets called “blue” hydrogen, and it is what is being piloted in a A$500m project in the Latrobe Valley right now that could turn brown coal into an export industry.

Finally, there is “green” hydrogen. This doesn’t come from fossil fuels at all – the production process involves an “electrolyser” that splits water into the separate components of hydrogen and oxygen. But this is only a zero or near-zero greenhouse gas emission process if the electrolysers are run on renewable energy. 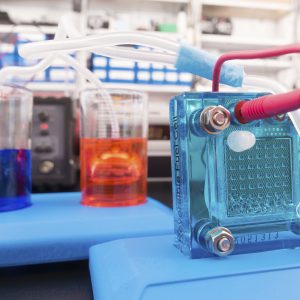 Green hydrogen is what the environmentalists love, but the problem is that it is the most expensive way to make hydrogen. Cost estimates are changing rapidly, but currently green hydrogen is well over US$9 per kilogram, while grey hydrogen from natural gas is under US$2 per kg.

The National Hydrogen Strategy adopted by the Australian Government currently seeks to develop both green and blue hydrogen, and the ambitious goal is for those technologies to achieve a price of less than US$2 per kg.

Now none of this really matters that much for the production of electricity – wind and solar power are very much cheaper. However, it is possible that hydrogen could be used as a “store” of energy to run gas turbines in peak periods or when wind and solar are not available. It would be even more costly than gas turbines running natural gas, but would be near-zero emission and only needed a small part of the time.

Hydrogen can be used in fuel cells in motor vehicles, and as a replacement for gas in industrial processes.

Where it gets close to home for coal mineworkers is that hydrogen can be used to replace coking coal in the making of iron and steel.

Coking coal plays a chemical role in the making of iron; it is not just a source of heat energy as with power generation. Coking coal is used as a “reductant” in a basic oxygen furnace (BOF) and what that includes is stripping the oxygen out of iron ore. Which is why the making of iron and steel involves a lot of greenhouse gas emissions.

But there is an alternative technology for making new iron called Direct Reduction Iron (DRI) which can use hydrogen to play the role of coking coal and in doing so eliminates most greenhouse gas emissions.

This is not an immediate threat to the role of coking coal as it is very expensive. Commodities researchers Wood Mackenzie (Woodmac) say a rule of thumb is that iron currently costs about US$380 per tonne to produce with coking coal, but with hydrogen it is more like US$900 per tonne. Hydrogen needs to fall in price to under US$3 per kg to be competitive.

Steelmakers in other countries that claim to be making steel with hydrogen (eg Thyssen Krupp in Germany) are in fact using grey hydrogen not green. And there is the obvious problem that most of the world’s steel mills using Basic Oxygen Furnaces rather than DRI so they will need to be extensively rebuilt to use hydrogen.

WoodMac’s view is that it will take until 2040 for DRI iron with hydrogen to become commercially viable, and much longer still before the world’s steel mills substantively shift to it.

So coking coal is around for a while yet, but the notion that it will always be required to make steel is wrong.

If you want to explore this issue further – and see how there might be a large new “green steel” industry located in the coal fields of NSW and central Queensland, then look at the recent report of the Grattan Institute, a middle-of-the-road think tank that reckons green steel could be a new large export industry for Australia – based in the current coal fields: https://grattan.edu.au/report/start-with-steel/