‘Angel in the sky’ saved our lives 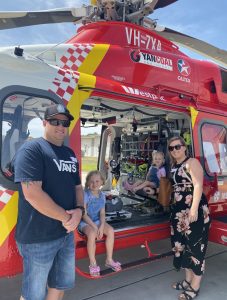 For over 35 years Northern District coal miners have poured millions of dollars into the Westpac Rescue Helicopter Service. Duralie Lodge Member Chris Griffith and his wife Rachel have both been rescued by the chopper after harrowing accidents.

“We had a massive contribution from the mineworkers and the Union way back which gave us the opportunity to have a second helicopter here. If one was broken, we could roll the other one out.

“It’s in the multi-millions of dollars the mineworkers have contributed over the years.”

Chris Griffith was still oblivious to all this in 2001 when he was flown to hospital after being knocked unconscious in a head on collision with another trail bike rider in remote bushland.

“I had parts of my kneecap in my thigh,” says Chris.

He’d also broken the longest and strongest bone in the human body – the thigh bone.

“It’s the hardest bone in the human body to break, and I shattered it. I broke my motorbike helmet, split it up the centre… it was a pretty fair hit.”

Chris was just 15 at the time of his accident. He is now married with two delightful daughters, 6-year-old Alyvia and 3-year-old Maycie.

But that fateful trail bike accident is not the only reason he and his wife Rachel run an annual Charity Gold Day at Wingham to raise money for the service. The family were once again touched by the service in 2010.

I thought my wife was dead

“My wife just left the house and no sooner than three minutes after I heard a loud crash outside, gut instinct was ‘something’s not right’,” says Chris.

“I jumped in my car, it was just on dark, as I got closer I worked out it was my wife’s car that was involved in a motor vehicle accident.

“I thought she was deceased, that’s how bad the accident was.

“It took emergency services an hour and a half to cut my wife free of the car.

“And at that time I could hear the Westpac helicopter in the air above us, coming to land, and just hearing that noise was a sense of relief knowing you’ve got some of the most highly trained experts on board that aircraft.”

Rachel had broken both wrists and ankles, both knees, some ribs and her pelvis as well as suffering a head injury. It was eight months before she’d be back on her feet.

While Chris and Rachel raise money for the service to say thank you through their annual golf day – other Hunter Valley miners use raising money for the lifesaving aircraft as a chance to build community.

Matt Dodd is one of the organisers behind the annual WestPac Rescue Helicopter Service Charity Football Day where teams from all over NSW compete for glory. “Originally we just started off in the Upper Hunter, but it’s slowly started to progress, we’ve got some Mudgee teams, some teams from Narrabri, down to the South Coast, and now even Queensland teams wanting to have a crack,” says Matt, who’s also Vice-President of the Mt Thorley-Warkworth Lodge.

Seven years ago the competition started as a knock out, but now with over 20 teams competing it’s a pooled and round robin competition where teams go onto semi-finals and a Grand Final.

And while coal miners traditionally have looked after each other, no matter what Lodge or region they’re from, there is no quarter given, or asked for, after the whistle blows.

“There’s been some very dominant teams… the Ashton Wombats have been very strong then you’ve got Austar, you’ve got Wambo Wolves who have been strong over the years, and Ravensworth Rhinos have also been a strong team.”

And as Matt says there’s certainly plenty of talent on the paddock.

“The ex NRL talent is quite hefty throughout the competition and it actually becomes quite competitive once the whistle blows, you’ve got players like Jesse Royal, Liam Foran, Jack Afamasaga who played for the Storm, Eels and the Sharks, Terrance Seu Seu, Adam Clydsdale and Reegan Tanner just to name a few,” he says.

Last year’s grand final was a cracker when the Wambo Wolves finally won the shield.

“They’ve been a dominant team throughout the past three or four years and they’ve only just missed out on the cherry quite a few times so to see them boys get the win over the previous winners the Bengalla Badgers was pretty epic,” says Matt.

Matt says it’s a great day – and to put Saturday November 7th in the diary.

“Get down to Pirtek Park Singleton on November 7th, there’s a kid’s fun zone, there’s heaps of stuff for the whole family and you’ll see some cracking footy.”

And its no small money spinner – the dollars raised are large.

“In the last six years coming into our seventh now we’ve raised $412,000, with the competition last year being the biggest one at $120,000, each year we keep eclipsing our mark and hopefully we can go one step further this year.”

And all that money goes into that state-of-the-art aircraft operated by the Westpac service. “The helicopters we have today are 7 tonne, and worth about $16 million dollars each, with a $2 million medical fit out in the back,” says Richard Jones.

“We have four in Northern NSW and another organisation covering the south have eight.

“They are all identical so we have ‘inter-operability’ so a paramedic in Wollongong if he or she is deployed to Newcastle, or Lismore or Tamworth, everything, even the glove holders, are in the same spot which is all about reducing risk to as low as practically possible.

Richard Jones has nothing but admiration for the contributions of CFMEU members.

I’ve been to plenty of mine sites to thank the girls and guys and thanked them for their contributions,” he says.

“The CFMEU have a position on our board of directors and we’ve had some wonderful contributors from the mining union.

“It’s the single biggest donation we get every year is from the coal miners of this region, so I couldn’t thank them highly enough.

“Coalminers from this region have proudly said for years ‘that little angel is in the sky should we ever need them’ but they’re also happy to support the wider community with their donations.”