BHP says no to equal pay for Ops Services, claims workers have ‘no concerns’

A senior executive of BHP’s in-house labour hire provider Operations Services has told the Union the company has heard of no concerns from workers about their terms and conditions of employment.

Organiser Jason Lipscombe said he didn’t know whether to laugh or cry at the claim in a letter from Mark Swinnerton, Vice President of BHP OS.

“I have been speaking to hundreds of Operations Services workers at Queensland mines over the past year and every time I go out on site I hear the same complaints,” said Jason.

“They include getting out of the pit constantly late, having to work extra time for no overtime payment, having to work Christmas Day and Boxing Day and working next to other BHP workers but getting $30,000 to $50,000 less for doing the same job.” 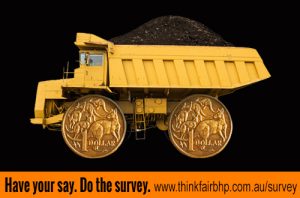 OS workers are being invited to participate in a survey about their biggest workplace issues.

Take the survey, or share it with a friend who works at OS: https://www.thinkfairbhp.com.au/survey

Initial results suggest that only a very small minority of OS workers think their wages and conditions are satisfactory for a permanent coal miner.

The Union’s legal action against the two Enterprise Agreements covering OS workers is continuing, following a decision in July upholding the CFMEU’s appeal against their approval. Operations Services have been given more time to respond to arguments raised by the Union and a further appeal will be held later this month.

After the July decision, General President Tony Maher wrote to BHP CEO Mike Henry, calling on the company to end the unfair pay differential between Operations Services and direct BHP employees and offer the same pay for the same work.

“The simplest and fairest approach would be for BHP to simply offer Operations Services employees employment under those existing enterprise agreements. After all, BHP freely negotiated these agreements and regarded them as fair and appropriate for the production and maintenance workers on those sites.”

A letter from Operations Services Vice President Mark Swinnerton in response confirmed the company had no interest in closing the gap in pay and conditions with direct BHP employees. He persisted with the company line that workers were fortunate not be employed as casual labour hire and claimed that ‘no concerns about these terms and conditions have been raised by our employees.’

At least, no concerns that have made it to his office.

The CFMEU wants to hear the concerns of OS workers and address them through genuine bargaining for a new agreement.
All OS workers are encouraged to register their details on our site thinkfairbhp.com.au.