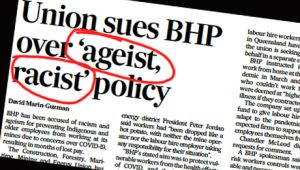 Aboriginal and older labour hire mineworkers classified as vulnerable to COVID have been stranded without pay for months after BHP excluded them from the workplace but refused to pay their wages. The Union is now fighting to recover their lost pay.

BHP announced a nation-wide policy in April that mineworkers considered vulnerable to health impacts from COVID – including people aged 65 or over and 50 for indigenous workers, or younger if they had an underlying health condition – would be provided with paid leave and directed to stay home.

Labour hire workers on BHP sites employed through labour hire firms were covered by the policy, but BHP stopped providing for their wages from July 1.

For affected workers at BHP’s Mount Arthur mine in the Hunter Valley, labour hire company Chandler Macleod also refused to cover their pay or provide alternative work, leaving these workers with no pay and no ability to return to work.

Our Northern District has launched legal proceedings against labour hire company Chandler Macleod and BHP’s Mount Arthur Coal on behalf of eight Members, including Aboriginal workers in their 50s, workers aged over 65 and workers with underlying health conditions.

BHP is in the process of returning the excluded employees to work, but they have been left without pay for nearly 12 weeks from July to September with both BHP and Chandler Macleod refusing to pay.

Many of the labour hire employees are casual, meaning they had no accrued holidays or entitlements to fall back on.

The Union is arguing that the actions of both BHP and Chandler Macleod contravene discrimination provisions in the Fair Work Act because the workers had been excluded from the workplace and suffered loss due to due to their race, age and physical disability.

Northern Mining and NSW Energy District President Peter Jordan said that a program intended to protect vulnerable workers had resulted in them losing tens of thousands of dollars in income.

“BHP’s stated aim was to protect vulnerable workers from the health effects of COVID and that’s a worthwhile aim,” said Mr Jordan.

“But it has exposed BHP’s disgraceful practice of employing at least half its workforce through insecure and casualised labour hire arrangements, resulting in serious financial loss for these workers.

“These workers have been performing the same work as direct BHP employees at Mt Arthur and BHP could and should have continued to cover their pay as it has done for its direct workforce.

“Instead, they have been dropped like a hot potato, with neither the mine operator nor the labour hire employer taking any responsibility for their situation.

“BHP should be ashamed of its treatment of these indigenous and older workers it claims to be protecting.

“It is discrimination and we will be fighting to recover their lost wages.”

Labour hire workers at BHP coal mines in Queensland have also been affected by BHP discontinuing payments from July 1 and members have been represented by our Queensland District.