Barcaldine in outback Queensland is a small town with a big history. It is known as the birthplace of the Australian labour movement.

In 1891, Barcaldine became the epicentre of one of Australia’s first major industrial disputes, the great Shearers Strike. The demand of the Shearers Union for ‘none but union agreements’ was met with resistance by the Western Queensland pastoralists, who responded by reducing shearers’ wages and demanding individual contracts.

The shearers refused to accept individual contracts and set up a strike committee headquartered in Barcaldine. Strike camps were set up at Barcaldine and Clermont. As the strike progressed, about 1000 strikers occupied the camp at Barcaldine. One of the first May Day marches in the world took place during the strike on 1 May 1891 in Barcaldine, with strikers carrying the Eureka flag.

In 1892, unions met under the big gum tree outside the Barcaldine Railway Station to form the Workers’ Political Party – later to become the Australian Labor Party. The Tree of Knowledge became the symbol of the strike. Sadly, in 2006, an unknown culprit poisoned the tree – but it has been preserved and protected by an award-winning structure. 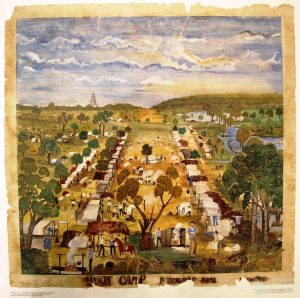 The Australian Workers Heritage Centre has been established in Barcaldine to acknowledge the town’s important place in the history of the labour movement.

A couple of months ago, Callide Valley Lodge Vice President Adam Burling was recently passing through Barcaldine on the way to his hometown of Longreach.

“I noticed that flag flying at the Workers Heritage Centre was old and had seen better days. The Eureka flag holds a lot of meaning and I thought it would be a worthwhile contribution for us to provide a new flag.”

The Queensland District and Callide Valley Lodge agreed to purchase the new flag and cover Adam’s travel to Barcaldine, where he last week presented it to Pat Purcell, stand-in Chairman of the Workers Heritage Centre and former Queensland State Labor Minister.

“It was a great honour to present the flag,” said Adam. “Patty is happy to report that Groundsman ‘Squid’ has scaled the ladder, and the new flag is proudly flying. Thank you for the support to all involved.”