About ten years ago, Chris moved from Queensland to the NSW Hunter Valley with his wife Shae and three children, Kai, Jaiden and Summer.

A former meatworker, Chris heard about the opportunities in mining and set about undertaking training and applying for jobs. After working as a contractor for a short period he secured a permanent job at Glencore’s Mangoola Open Cut mine. As an active unionist from the start of his working life, joining the CFMEU was a no-brainer. 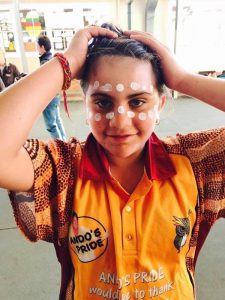 Throughout his life Chris has turned to art for relaxation, enjoyment and to promote understanding and appreciation of Aboriginal culture.

After becoming interested in art as a child, he honed his skills studying fine arts at Deakin University, where he expanded his knowledge of Aboriginal art techniques and his technical skills like colour mixing. Now, Chris uses his art to bring Aboriginal culture to a broad audience.

Since moving to Muswellbrook, Chris and Shae have been active in promoting NAIDOC celebrations at their children’s schools with talks, face painting, art and even Aboriginal-themed cake decorating.

“It’s about giving my kids and other indigenous pride in their heritage,” says Chris. “NAIDOC Day is their day and they can stand up and have their culture celebrated.”

Chris has designed a union shirt for the Anvil Hill Lodge, his work can be seen in local murals and he recently sent an artwork to London for his first overseas commission.

He hopes that the Rainbow Serpent painting at the union office will be a symbol of pride for all members.

“The Rainbow Serpent is the first story I ever heard as a kid, being told about how the land was created. District President Peter Jordan said the Union was delighted to receive Chris’s painting, which is displayed prominently and will be a permanent feature of the office.

“We’ve got a large number of indigenous members working across the mining and power industries. We’re very proud of their history and proud to have them as part of this great union.

“Everyone that comes into the office notices and comments on this picture, we are going to cherish it.”

Watch Chris explain the meaning of his Rainbow Serpent painting