China’s import ban, what will it mean for coal exports? The still-unofficial news is that the Chinese government has told state-owned power utility and steel mills to stop importing Australian coal. What does this mean?

On 12 October it was reported in business newsletters, and from there to major media in following days, that many coal-consuming businesses in China had been verbally ordered to stop using Australian coal. Nothing in writing; no formal directive issued.

This news does not stand in isolation – China has been implementing a cap on overall coal imports for a few years now, and so there has been a trend towards the end of each calendar year for coal to be stockpiled on ships or at port awaiting clearance. China has been doing this to manage domestic coal prices and production. While China has a long term plan to reduce coal use (see more below) it wants to manage the pace of that decline through managing coal prices and availability.

These import caps have generally been applied broadly to all sources, but this latest step seems to target just Australia.

The import caps and the latest targeting are both in breach of the Australia-China Free Trade Agreement, which has been shown (as with most trade treaties negotiated by Australia) to be one-sided and worthless to us.

How much does this matter? In simple terms China is the second largest destination for Australian coal. In first place is Japan, at 110 million tonnes (2019 figures), then China with a total of 93mt – 34.2mt of hard coking coal, 8.5mt of lower grade coking coal and 50mt of thermal coal. After that comes South Korea with 51mt, India with 49mt (mostly coking coal) and Taiwan with 34mt.

With total 2019 exports at 396mt, China is almost one quarter. In the order of $15 billion per year. So it matters – quite a lot. To both the country and to the Australian coal industry.

Overall China is Australia’s largest trading partner by a large margin. And it is the world’s new superpower, gradually surpassing the United States in the next decades in a process that is somewhat inevitable though undoubtedly accelerated by Donald Trump’s isolationism and dysfunction as US President.

Living with the United States was never exactly a bed of roses, with that country frequently interfering in other countries. But at least the USA was/is a liberal democracy while China has been an authoritarian one-party state for a long time.

This makes the process of “living with China” difficult. Relations are currently at a low ebb, and so we now see coal exports being targeted. With various LNP politicians thinking they can mouth off about China to suit a domestic audience that problem doesn’t look like being better managed anytime soon.

This latest large uncertainty in the coal industry has yet to play out decisively. 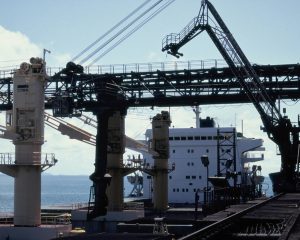 But wait there’s more (though no set of free steak knives!).

While the Australian coal import ban may be unofficial, China has been very official about telling the United Nations on 22 September that it plans to reach peak greenhouse gas emissions before 2030 and to be carbon neutral (net zero emissions) before 2060. For a nation that produces about half the world’s coal, and is the biggest source of heavy industry, that is a huge goal.

But China has a history of meeting its goals. While 2060 seems an eternity away, 2030 isn’t. To cap emissions China will have to curtail fossil fuels. And because it wants to manage the decline of its domestic coal industry to minimise social unrest, it is bound to do so by reducing imports first.

So, one way or another, right now or in the next decade, China is going to be reducing coal imports. Anyone who thinks they can persuade the world’s latest 800 pound gorilla to change its mind is welcome to try . . .