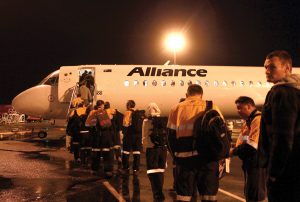 BHP has cut jobs, changed rosters and cancelled flights and accommodation for Operations Services workers at NSW’s Mt Arthur coal mine, leaving many workers unable to continue their jobs.

Last week, BHP’s Mt Arthur Coal mine in the Hunter Valley informed its Operations Services (OS) workforce that job numbers would be cut to four crews operating two excavators – about 110 workers down from 160 currently on site.

At the same time, OS workers were told their rosters would change from 7/7 to 5/4 and provision of paid flights and motel accommodation was being cancelled.

Northern District Vice President Jeff Drayton said the Union had been opposed to BHP introducing the 7/7 FIFO-style rosters and motel accommodation for OS workers at Mt Arthur because the jobs could easily be filled locally on residential rosters. Hear more about the OS changes at Mt Arthur in our latest podcast.

However, to introduce the model and then suddenly ditch it leaves many workers in the lurch, because they will be unable to fund their own transport and accommodation on the new roster. 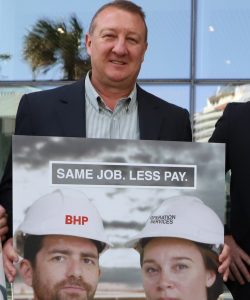 “They should have listened to the community before the introduced the FIFO model, it would have stopped 160 people getting stuffed around,” he said.

“They’ve just changed the rules with no warning. There are OS workers travelling to Mt Arthur from Sydney, Queensland, even South Australia.

“It will be impossible for them if they now have to travel twice a week, not once a week, and fund their own flights and accommodation.

“Few of the current OS workforce live within the journey zone for daily commuting. But BHP will try and get out of paying any redundancies because their contracts say they can just get relocated anywhere on the east coast. That means they have to uproot their family or self-fund their commute from NSW to Queensland if they want to keep a job.”

The Union is insisting on consultation over the changes to represent the interests of members at Mt Arthur. BHP has struggled to fill Operations Services positions at the Hunter Valley mine – a silver lining to the current changes is that they signal the demise of the divisive and unfair work model in NSW.

Queensland Operations Services workers are being forced to take leave and shell out above-market rates for flights, with BHP insisting they take charter flights rather than commercial flights due to COVID.

Although flights were covered for many FIFO Operations Services workers in Queensland when they were hired last year, BHP subsequently cut payment for flights and insisted workers self-fund their commute.

Due to BHP’s COVID protocols they are required to take specific charter flights to commute between their location of hire and the airport closest to their work location – for example, Brisbane to Moranbah.

Members have told the Union that now more commercial flights are available, the charter flights can be significantly higher than commercial airfares.

What’s more, many OS workers are unable to secure charter flights that properly align with their 7/7 roster, meaning they have to take annual leave to get home on the same day as their last shift, or spend an extra night in camp.

The CFMEU is looking at options to secure fairer travel arrangements for OS FIFO workers.

Meanwhile, the Union’s legal challenges to Operations Services Enterprise Agreements and OS workers being forced to work on Christmas and Boxing Day are continuing.

If you work for Operations Services, let us know the issues affecting you via our survey:  www.thinkfairbhp.com.au/survey