FIFO workers hoping for family Christmas after months away Many FIFO mineworkers in Western Australia are looking forward to seeing their families at Christmas for the first time in months – but they’re also worried about getting caught up in sudden border closures if COVID clusters emerge.

Interstate Fly In Fly Out work arrangements are widespread in WA’s iron ore mines. The state’s hard border closure means that some workers have not been home to see their families on the east coast since March.

On 14 November, WA’s border restrictions changed to allow unrestricted travel to and from Queensland, the Northern Territory and Tasmania. South Australia was also in that group, until last week’s outbreak prompted a sudden reintroduction of border restrictions. All mineworkers returning from NSW and Victoria must isolate for 14 days on their return.

Rio Tinto iron ore train driver Paul Bloxsom has been home to Mackay in Queensland just once since March, for his daughter’s wedding in August. He had to spend two weeks in isolation in Perth on his return, where his only company was the police officers coming to check he was complying with the rules. “I asked them if they wanted to stay for a cup of tea, they were the only contact I’d had,” he says.

Paul didn’t return home at the end of his latest two-week swing in case he got caught up in any sudden border changes and because Rio Tinto is requiring interstate workers to commit to blocks of at least three months in WA. He hopes to be home for Christmas and a return to normal fortnightly travel next year. 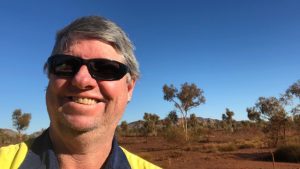 Paul Bloxsom hopes to be home for Xmas

As a ‘Peer Supporter’, Paul is available to talk to his workmates – many of whom are having a hard time with long spells away from home. Many FIFO workers are staying home and using up accumulated long service and other leave.

“A lot of guys are really struggling with it,” he says. “Quite a few have had to up and go home because they weren’t coping.

“The Premier wants us to relocate to Western Australia, but that’s not possible for most of us because our homes and families are established interstate. We are just hoping things return to normal next year.”

WA District Secretary Greg Busson said an increase in disciplinary matters suggested the pressure of border restrictions was taking a toll. He is meeting with mining and rail companies urging them to take a more proactive approach to mental health checks for workers and to be more mindful of the pressure they are under.

“The employers should be reaching out to workers for a chat, not waiting for workers to self-identify that they are struggling.”