This year’s Memorial Service in Moranbah was as moving as ever, but with a difference due to COVID restrictions.

Residents of the Bowen Basin coal mining hub were urged to ‘put your lamps out’ and gather in their driveways at dusk on 6 November to commemorate mining lives lost in their coalfields. The whole community got behind the effort, with kids and Moranbah State School putting a big effort into making lanterns.

A smaller event was held at the town’s new memorial, which opened just last year, with community representatives and grieving families.

Speakers talked about the importance of the memorial to the town, providing a peaceful place for families to gather at the heart of the community. Isaac Mayor Anne Baker said that the annual service provides time for reflection about why safety must always come first, providing a brief and moving history of mine regulation and the not-so-distant history of children working in mines. Even as recently as the 1950s boys as young as 14 were working in Qld mines.

Federal Labor Senator Murray Watt paid tribute to the Mines Rescue Teams, Emergency Services and health workers and called for more permanent employment in the mining industry. He said the explosion of labour hire and casualisation has a direct effect on safety in mines. “If people are in fear of losing their jobs, they won’t speak up on safety issues.
Making sure that people have secure work is critical for making sure that people have safe work.”

Our Queensland District President Stephen Smyth represented the Union and the Mineworkers Trust – explaining why we will always remember lives lost in mining and fight to prevent more names being added to memorials. Here is an excerpt of his speech: 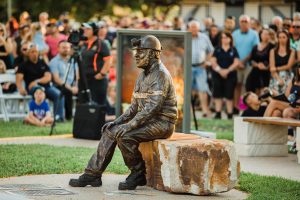 “It breaks my heart that since we gathered last year, another name has been added to this memorial.

I pay my respects to the family of Brad Duxbury, tragically killed in an underground mining accident at Carborough Down last November just weeks after this memorial was unveiled.

Brad was a much-loved family man and valued Member of our Union’s Carborough Downs Lodge and I know that Brad’s loss continues to be felt very deeply.
On behalf of the Queensland District and our national union – the Mining and Energy Division of the CFMEU – I pass on our collective thoughts, prayers and respect to all family members grieving the loss of a loved one who never returned home following their shift.
I know that memorials like these can be difficult, but they are also an opportunity to offer comfort and to reassure families that their loved ones will never be forgotten by their mining community.
Our Union has been representing coal miners for over 100 years. The Union was born in difficult circumstances. In the Queensland coalfields, workers toiled in dangerous and arduous conditions and families lived in tents without the most basic facilities or services.

A constant throughout our history is that we have strived to always remember those who have paid the ultimate price for their service to the mining industry. To remember the human price paid for the prosperity of the industry.

Memorials are held in all our mining towns – indeed all our Districts across Australia – and they are the most important day of the year for us. As we remember those we have lost, we renew our commitment to be ever vigilant and to keep fighting for continuous improvements in safety.

Much has changed for our Industry and Union over the past century. Picks and pit ponies have given way to longwalls and draglines, we now have safety legislation and checks and tests and protective equipment. Sadly, many of the advances we have made in coal mining safety have their origins in workers’ serious injury or loss of life.

Much has changed, but there’s also much that has remained the same over the past century:

• Coal miners still do a job with inherent dangers and face risks every time they start a shift.
• Mining companies still have a ruthless drive to dig up the highest volume of our valuable resources for the lowest cost.
• Reforms to improve safety in the coal industry still have to be hard fought by workers, against powerful mining company interests.

We have been brutally reminded of these facts this year with the shocking explosion at Anglo’s Grosvenor mine just a few kilometres up the road in May. We welcome the broad Coal Mining Inquiry being held, not only into events in Grosvenor but the broader safety culture in our industry.

Like many others, I was shocked to hear Anglo’s CEO give evidence at the Inquiry about the company’s so-called ‘Burning Ambition’ to double the company’s cash flow by 2023. It’s against this kind of attitude that we have always had to fight for worker safety to be given the highest priority it deserves. Unfortunately, ‘safety before production’ still seems to be an empty slogan in many corners of our industry ……

We will never stop fighting to prevent any more names being added to memorials like this one.”