Peabody in trouble again – what does it mean for Australian operations? Peabody Energy was for a very long time the largest publicly-listed coal mining company in the world, and traces its history back to 1883. It was largest in terms of market valuation rather than annual production (where the award would go to the state-owned Coal India). But in late November the market value of the US-based company was just US$134 million, and the company has given formal notice that it may have to enter bankruptcy-protection (Chapter 11 proceedings under US law).

So what went wrong and what does it mean for the company’s substantial Australian operations?

On 9 November Peabody announced its third quarter results, showing a loss of US$1.6 billion for the nine months to end-September on revenue of US$2.15 billion. (Much but not all of the loss is due the one-off impact associated with the North Goonyella mine fire in Australia.) It stated that it would be likely to be unable to meet the terms of its borrowings and so could be forced into bankruptcy unless it can reach new deals with its lenders.

This would be the second time in just five years that Peabody has entered bankruptcy proceedings. And in the USA it is far from alone in going bankrupt or near-bankrupt. Many big names in US coal have followed a similar path in the last several years – Arch, Murray, Alpha, Walter Energy, Patriot Coal, Westmoreland and many more.

The principal cause has been cheap gas (from fracking) replacing coal in power generation, with coal’s share of power supply dropping from over 50% in 2005 to 20% in early 2020. Early 2020 also saw the share of renewable energy surpass coal-fired electricity. As renewables continue to fall in price, more coal power and coal supply will be forced out. 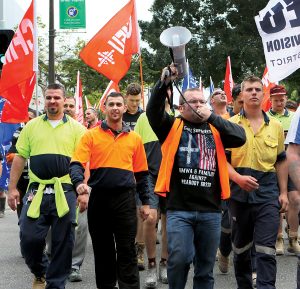 This occurred before Donald Trump became President and barely halted on his watch despite his claims to back coal. Coal plant retirements fell to under 10 Gigawatts per year in 2016 and 2017, but rose again to around 15GW in 2018 and 2019. 2020 will be even worse for coal and while there may be a small post-pandemic boost in 2021, there is no one who does not see US coal in permanent decline.

The situation in Australia is different – most coal production is exported rather than used domestically, so the already-evident decline in coal power generation has had less impact due to continuing growth in Asian markets.

Back in 2016 when Peabody had its first bankruptcy proceedings, the Australian operations were largely sheltered from it. At that time, Australian coal was actually recovering from price declines since the end of the Resources Boom in 2012 and commencing a mini-boom that was to last until mid-2019.

This time it’s different, as the end-2019 decline continues into 2020 and has been exacerbated (though not greatly) by the pandemic. The job losses during the pandemic so far have been modest, but Peabody mines such as Coppabella, Wambo and Metropolitan have been prominent.

It seems the Wilpinjong mine is the most profitable of Peabody’s operations, and corporate restructuring is occurring so that some debt can be secured against just that mine. The history in Australia with respect to coal companies going broke is that some other investor tends to buy them and, with a lower capital cost, they are profitable again.

But that does depend on where investors think international coal markets are heading (too big story for this article) and, for smaller investors, their capacity to raise finance for coal mining. Not only are many financial institutions becoming reluctant to finance coal mining, but providers of essential business insurance are also becoming more hesitant.

Overall Peabody’s Australian mines remain in a better situation than the US mines, but it remains to be seen what consequences Peabody’s troubles in its home base will cause.