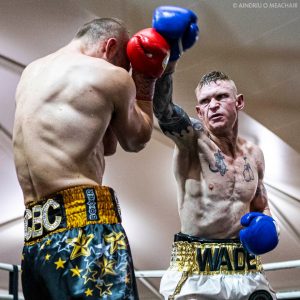 Our Member Wade Ryan showed the grit and determination he is known for when he recently won a boxing championship at East Cessnock Bowling Club in front of an appreciative crowd. His effort was rewarded: he won both the Australian and International Super Welterweight titles.

The Gunnedah local, who works at Narrabri Underground, has been boxing since his teenage years. Now 30, he has picked up State titles along the way but this was his first National title. He claimed the vacant IBO title at the same time.

His preparation for this fight was extraordinary. While maintaining a demanding 12 hour roster at Narrabri he would make the seven hour journey to Sydney for ‘quality sparring’, while maintaining his condition and weight.

Wade won in a bruising encounter with reigning champion Troy O’Meley, who came into the fight with a run of 19 professional victories. According to his trainer, David ‘Spike’ Syphers, who has been coaching him since his teenage years, he has always wanted to be a champion and he will go further. There could be a world championship to contend in the future.

Organiser Ross Whitaker has known the boy from Gunnedah since those early days and speaks highly of his commitment and hard work. He says “it has been a long, hard journey for him and his discipline is incredible. Not only that, but he is a true gentleman and shows grace in his defeats as well as his victories.”

Congratulations Wade on this super victory. We are keenly waiting for your next championship.