‘Don’t back down’: How Boggabri miners took on the boss and won 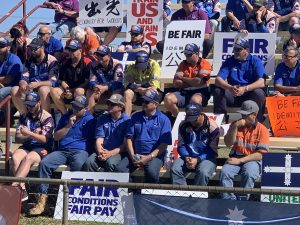 Mineworkers at Boggabri Coal in NSW’s Gunnedah Basin are enjoying a second pre-Christmas pay rise after a tough but successful industrial battle last year. Our latest podcast looks back at the ‘Battle of Boggabri’ and how the workers won.

In the winter of 2019, our members at Boggabri Coal were facing the fact that negotiations for a new Enterprise Agreement had stalled and they took the gutsy decision to embark on a campaign of industrial action.

Boggabri Lodge Secretary Dave Boxsell says the campaign of rolling stoppages was a difficult time as workers came under pressure from mine operator Idemitsu, but: “we just knew what we had to do and we did it.”

Northern Mining and NSW Energy Vice President Jeff Drayton says the situation for workers at Boggabri Coal started to deteriorate in late 2017, when owner Idemitsu decided to end its contract with Downer who had managed the site for years with reasonable, union-negotiated agreements.

They moved on to a couple of different contractors, first BGC then One Key, both offering substandard agreements challenged by the Union. Idemitsu then decided it would be easier to hire production workers directly, which meant negotiating a new enterprise agreement.

Negotiations became difficult when the company kept changed its bargaining team, sending discussions back to square one.

“It started to become quite messy,” says Jeff Drayton. “They’d just had enough. The Lodge, which has some 350 members, made a decision that we had to do something different as we were just going around in circles.”

The Union applied for protected action ballot, run by the Australian Electoral Commission, which is required by taking any industrial action under the Fair Work Act. The vast majority voted yes: “Over 99% of people were prepared to take action,” says Jeff.

Workers then began a campaign of rolling stoppages: they would give the required two days’ notice for work stoppages and then decide on the day whether or not to take action. From August to November, stoppages ranged from two to 48 hours, with mass meetings held in nearby Gunnedah.

The company put two enterprise agreements to workers, which were voted down. “It was pretty clear members weren’t prepared to accept what they had to offer,” said Jeff Drayton.

Finally, Idemitsu succumbed to the pressure of the rolling industrial action, which was affecting production, brought their most senior Australian representative to the negotiating table and terms for a new deal were agreed. 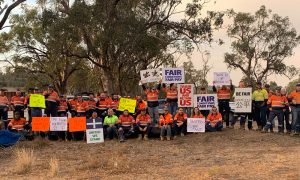 Improvements to the agreement included a 12% pay rise over four years – kicking in just before Christmas each year; a guaranteed bonus scheme; a $4,000 sign-on bonus and arbitration to resolve disputes.

Member Lisa Richardson said the new conditions that meant most to her were having all forms of leave paid as at work as well as a training clause included in the EA, meaning more opportunities for new skills.

“I was really excited to see that we got our leave paid as if worked,” she says. “With our pay when we were sick and took sick leave, our penalties weren’t paid so there were times when you would lose a couple thousand dollars in one pay just because you had a couple of sick days.

Jeff Drayton said Boggabri mineworkers now get the pay and conditions they deserve.

“It took us a long time, with a lot of heartache but eventually we got there.”

Lodge Secretary Dave Boxsell said there are lessons for all workers from the ‘Battle of Boggabri’.

“The lesson you can learn is that nothing will come easy. You’re going to have to fight for it.  We’re in a situation where companies take money wherever they can and the first place they look is towards us, with wages and the rights of the worker.

“You’ve really got to stick together, look out for each other, listen to your Lodge officials … follow their lead and stick with it, don’t back down.”

LISTEN TO THE FULL STORY ON OUR PODCAST.