When coal miner Nic started at 6am that winter’s day he had no idea it would end with his 200-tonne truck bursting into flame underneath him and three hours of walky-talky chatter with rescue teams as he scrambled to safety.

It started as a normal shift – after pre-start he saw he was on the reject truck, not the dozer or the loader, like he usually was.

LISTEN TO THE FULL STORY ON OUR PODCAST.

“I’d just got back from doing a traineeship in the washplant – so was bumped back to the reject truck,” says Nic.

The reject truck runs 24/7 and takes rock and other contaminants from the coal washplant to the gigantic reject pile.

“The workload depends on how dirty the coal is, but if the reject truck stops the whole washplant shuts – so it’s high pressure,” he said.

At 2.30pm Nic was waiting at the reject bin and the two-way radio crackled to life – he was told to do one more run to the reject dump before coming in for crib break.

He started on the one kilometre run to the back of the ramp and at a snail’s pace began the agonisingly slow drive up the ramp as the massive rig laboured on with a full load.

“From the summit you can see for miles, as I was reaching the top I noticed the watercart directly in front of me a couple of hundred metres away,” he said.

“Just as I got to the top there was a huge bang and suddenly the whole deck was on fire.

“It felt like a tyre pop – but it was a bigger bang – I felt it move underneath me – instinct kicked in – I grabbed the two-way with one hand and with the other hit the park break and dropped the stairs,”

“The deck blew off, flames came out everywhere.

“As I went round the deck and down the stairs I had to run through fire – I got all singed on the side of the face and on my arms.

“The watercart was up there – in my vision – so when I called emergency – they called for the water cart to be on scene – but it was already there.

“I ran for a couple of hundred metres towards the watercart.

“She’s driven towards me – by the time I ran across the paddock she had her stairs down and I leapt in.

“The water truck was empty, so she took off and drove round the back end of the pile – we got as far away as we could.”

But what neither Nic or the water cart driver didn’t realise was there was another person on the mountain top that afternoon.

Driving up behind him as his truck exploded into flames was an OCE about to conduct an inspection.

Now the whole entrance to the top of the pile was a ball of flames.

Luckily, the OCE had made it onto the top and driven around to join the pair and was now standing with them looking at the inferno behind a low rise.

“There were 30-metre-high flames, and the truck is 10 metres tall, so yeah it was a sight.

“When the front driver wheel popped – she travelled 250 metres.

‘So the three of us where there and they had to come up with a rescue plan to get us off before it blew up, and to make matters worse pretty soon the wind changed direction and was blowing toxic smoke towards us.

“We’re standing behind a pile half the height of a truck while the rescue rangers are organising a plan, behind us is an old pit they pump water into, it’s a natural fall – it’s a 70-degree, 100 metre wall. We stood there for an hour – they couldn’t get to us obviously as the burning truck was blocking the road.

“They got us to walk to the south on a non-flattop pile. Then we slid down the back and they dropped ropes to us so we could climb out again.

“They contracted out the mine rescue and they were hopeless … they regularly had to be rescued as they were lost.”

“She spent too long on the two-way and the flames got so big she had to jump over the handrail.

“She broke both ankles – and never returned to work. Those injuries will be with her for the rest of her life.” 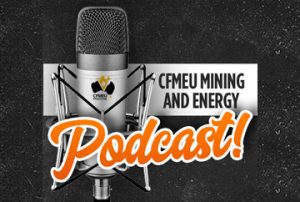 Do you have a close call story like Nic’s? We’d love to hear it. Email the CFMEU Mining & Energy podcast at: [email protected]