A delegation from our Union has told a Senate hearing that the Morrison Government’s IR Omnibus Bill would make the casualisation crisis in mining worse, not better.

There are three main ways the IR Omnibus Bill would make the casualisation crisis in mining worse: 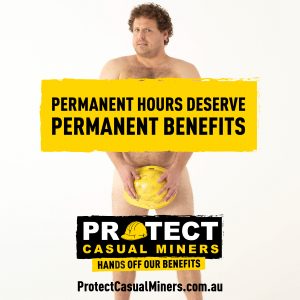 The Bill is currently in the hands of cross-bench Senators, email them at ProtectCasualMiners.com.au to stop the Bill in its current form.

They told Senators about the casualisation crisis in mining and the Union’s efforts to address it. Jeff Pearce recounted that when he was an apprentice at Newlands Mine 25 years ago, there were two casuals on the whole mine site.

“Now I’m at Peak Downs, and we would have more labour hire on that mine site than we have permanent employees.

“I work in the field crew. I look after the diggers, dozers, draglines and shovels and we have more labour hire. In my crew, the hydraulic crew, we have a crew of eight. There are only two permanents. That crew has been together for eight years. So those guys have been on that crew as labour hire, as casuals, for eight years.”

Gav Pearce said the two-tier system was bad for morale.

“I’ve worked in my section at the mine for 16 years. In the last nine years I’ve worked in my department. I’ve had men come in to my area where they’re classed as a member of that crew yet everyone is labour hire.

“They’re paid less. It’s demoralising to work alongside a man doing the same work and you know that that bloke next to you is getting 20, 30 or 40 per cent more plus all the perks that come with it.

I’ve seen it firsthand, and it takes its toll on a man. They’ve thrown a carrot, from time to time, ‘There might be some permanent jobs coming up,’ but that just doesn’t happen.” 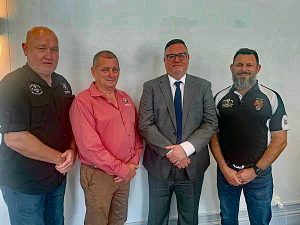 Our National Legal Director Alex Bukarica said that landmark WorkPac Skene and Rossato decisions had successfully prosecuted the argument that the (permanent casual) employment model widespread in mining was not lawful. But while the Morrison Government was claiming to fix the epidemic of casual labour hire in mining, it would actually entrench it by overturning the WorkPac wins.

“Since our success in that case, the clamour arising from big business and labour hire lobbyists has been loud and persistent. And it appears that in relation to the Omnibus Bill, the Government has taken the side of big business over that of regional mine workers.

“This is because the proposed definition of casual provided in the Bill essentially guts the Skene and Rossato Federal Court cases of their meaning and importance. The proposed definition of casual does this by giving primacy to the employer designation or label at the point of hire. It uses some of the language used in those cases, but then subverts the central point of the legal precedents by precluding an examination of the actual substance of the employment relationship.

“Instead of requiring that an employment contract reflects the truth about the legal relationship between a worker and his or her employer, the Government is proposing a form of wilful blindness to reality.

“We urge you to reject the proposed definition of casual in the Omnibus Bill. We respectfully request that you do all you can to protect the important gains achieved for mineworkers in the Skene and Rossato cases.”

Add your voice: email the Senators at ProtectCasualMiners.com.au

Read the Union’s submission to the Senate Inquiry into the IR Omnibus Bill.