Members to vote on independent future 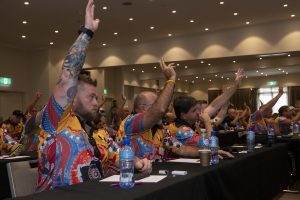 On 1 March, over 300 delegates at our National Convention unanimously endorsed applying for the ballot to give members a say on whether to stay in the CFMMEU or form a standalone Mining and Energy Union.

On 25 March, Central Council endorsed the application, which was lodged with the Fair Work Commission (FWC) the following day.

Now, the FWC will set a timetable for the process.

Our new website MiningandEnergyFuture.org.au will keep members up to date during this time. Convention delegates enthusiastically supported the resolution for a ballot after hearing reports from General President Tony Maher and all District leaders.

If a majority of members support forming a new union, the Mining and Energy Division will then apply to the Federal Court for orders regarding transfer of assets and a withdrawal date.

Once legal processes are complete, all members would transfer to the new union along with elected positions, lodge, district and national structures. The Mining and Energy Division has the resources, experience and enthusiasm to operate as a standalone union.

Hear what our National and District leaders had to say at Convention: