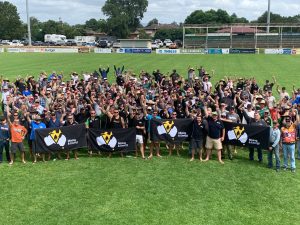 Coal miners at Rix’s Creek mine in the Hunter Valley are taking strike action to address a long-term concern over unfair leave arrangements for shift workers.

The next strike begins on Wednesday 7 April, for three days.

Members are determined to use the current round of bargaining to address a long-standing concern about night-shift workers missing out on their shift loadings when taking sick and annual leave.

Leave being ‘paid as at work’ is a key demand for a new Enterprise Agreement at Rix’s Creek, to prevent permanent night shift workers losing hundreds of dollars a week when they take leave.

Workers currently lose $580 a week on sick leave and $370 a week when they take annual leave.

“These are permanent night shift workers, they’ve earned those entitlements and we are determined to fix this,” said Northern Mining and NSW Energy District Vice President Jeremy McWilliams.

He said Bloomfield Collieries had traditionally been a fair and reasonable, family-owned mining company that prioritised looking after workers and working through problems.

However, a management change has seen the company become more hostile and litigious, like the big foreign-owned mining companies operating in the region.

“The family-owned company has morphed into a usual coal company and Bloomfield collieries today is significantly different to what it was 30 years ago. Now it’s just like dealing with another Yancoal or Glencore.

“But if they think they can exhaust us through legal action or divide and conquer the workforce they are wrong.

“Our members at Rix’s Creek are strong, united and determined to resolve this issue.”