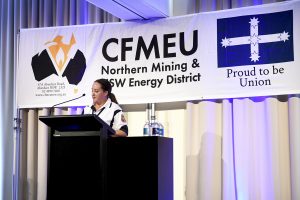 Mel Shore is a check inspector at Mt Arthur South. She spoke at the Northern Mining and NSW Energy District AGM about being the first female site checkie in the District and some of her other firsts in the mining industry.

Here’s what she said:

I’m standing here speaking to you as the first female check inspector in the Hunter Valley coal industry. It’s a role that I’m honoured to have however I’m not going to single myself out as anything but a coal miner and union member in a position trying to make my site and our industry safer.

My story starts with a lot of firsts, a few I want to share with you today.

My first role in mining was in a small gold mine in Cobar in Western NSW. I was out there because my first teaching job out of college was running the local mobile preschool. The local goldmine was kicking off and employing truck drivers. I went and saw the local contractor who owned the equipment and told my first lie – I told him i could drive trucks. The trucks I meant were flat beds on a dairy farm picking up hay with my family!

However, it was enough for him to take a chance on me and give me my first mining job.

The mine was more like a small hole in the ground with one ramp and one dump.

I was the first and only female on site.

It was the place I had my first slide – from top to bottom on that ramp daily as our only water cart driver flooded the shit out of everything.

It was also the place I tipped my first loads on a dump that had no windrows as our dozer driver didn’t believe in them. You simply reversed back until you felt your truck sink then tip your load – it was that simple. 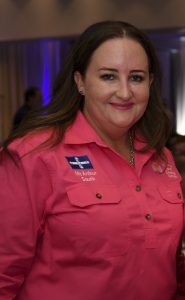 It was also the place I saw my first serious accident. This was a fellow worker lose control on a haul road like I said old watercart driver had been through and flooded the haul road they then tried to descend a ramp, totally lost control and ended up climbing the windrow and upside down on the roof.

It was the first time I ran from my truck to pull a work mate out of an upside-down truck. There was no rescue crew and luckily there were no injuries.

I would regularly relay the stories of this mine and my first mining job to my Dad. Dad was at Bulga Coal and at the end of each story dad would tell me to get onto the union rep but there was no union or rep.

Having overshared so many unsafe stories with Dad, like the one about the shot that went wrong and took out the crib hut, or the guy who rocked up to work stoned and took out the reject bin, I decided it was time to come home and was lucky enough to score a job with Pegasus at Mount Thorley Warkworth and 6 months later I was made permanent with Rio.

Again, I was the first female on crew although Jodie Cam (currently Lodge Vice President at Liddell Open Cut) had been there a few months before me. She was the first mother I knew working permanent night shift while trying to raise a young daughter.

I remember being with my trainer for the first time fuelling up. I had come from a pit that didn’t have any PPE so I grabbed the fuel hose and turned around to connect it to the truck when he yelled “Stop. We are coal miners; we don’t get dirty. Put gloves on!”

It was the place I was first introduced to the union, Borax (Wayne Boreham from Mount Thorley Warkworth) signed me up. I was now for the first time a proud union member. However, it wasn’t the end of the firsts I experienced, with the first death of a fellow union member, friend and worker from cancer.

I experienced for the first time a multinational company treat their workforce as a number and try and replace us with individual agreements or workers out of Queensland.

It was the first place I’d seen anyone trained or promoted onto other equipment.

It was the first place I’d seen someone sacked, first Christmas party, first Union meeting – the list of firsts were endless.

So why am I telling you about my firsts?

Because all these things have shaped who I am and why I’m standing here today and why I am part of this union and the safety journey on my current site.

These firsts are all happening now on your mine site – the trainee going too quick and losing control, the dozer with inadequate windrows and the truck that doesn’t want to reverse back but does, the watercart that floods the roads and parks up for the night, the parent who’s been awake all day trying to return to work on nightshift with no sleep and sick children.

We all see and hear about it every day, however the firsts we need to be remembering are

Six weeks ago, I attended my first union Convention. We sat in this very place and voted to start another first – the venture of the solo mining and energy union. I was proud to be able to tell Dad this is the union that represents me!

We all have a role to play on safety on our sites and I want you to speak up first.

I’m grateful for the support I’ve received from my Lodge Delegates and fellow Check Inspectors and of course Tony Watson leading the way on safety.

We are all leaders of our industry and as we continue to transition into the future, I’m grateful for the lifelong friends I’ve made and all the firsts I’ve had along the way.

I’m grateful the union has been there to support our workforce and look forward to the challenges ahead.