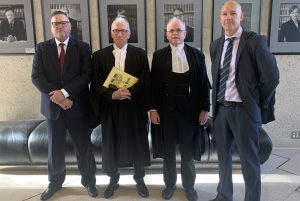 The union’s legal team was in the High Court in Canberra this week, to defend our landmark win for casual miners. But whatever the outcome, the Morrison Government and One Nation have teamed up to block rights and backpay for casual miners.

Our lawyers were one of five legal teams appearing in the High Court in WorkPac’s appeal against last year’s Federal Court Rossato ruling.

That decision in May 2020 reaffirmed the 2018 decision in the matter of Skene. They found that employing coal miners in full-time, on-going roles as casuals was unlawful and those workers were eligible to claim backpaid entitlements.

The May 2020 decision sent employer groups into a lather and they ran a scare campaign, pressuring the Morrison Government to ‘fix’ it for them.

WorkPac appealed the Rossato Federal Court decision to the High Court, which is the case currently being heard now. The Federal Government has intervened in the appeal to support WorkPac; and is spending $295,000 of taxpayers money to do so. A key point in question is that of ‘set off’ – that is, the Federal Court ruled that WorkPac could not deduct any casual loading paid from entitlements owed to exploited workers.

Meanwhile, the Morrison Government delivered new laws for employers. The only part of the controversial IR Omnibus Bill to pass through Parliament were provisions around casual workers.

These new laws are directly aimed at overturning the impact of our legal wins in Skene and Rossato and they operate retrospectively. They include:

The sum total of the changes makes it very difficult to pursue backpay claims for casual miners and threatens the class actions launched to win justice for miners exploited as casuals.

The new casual laws passed through the Senate with the crucial votes of One Nation Senators Pauline Hanson and Malcolm Roberts.

National Legal Director Alex Bukarica said the legal team would continue to fight the permanent casual rort in the High Court, but the new IR laws were a major obstacle for winning justice for casual miners.

“The Morrison Government and One Nation have legislated a protection racket for employers so they don’t have to compensate workers unfairly exploited as casuals for years on end.

“We will take every opportunity to keep up our fight. But the new laws are directly aimed at undoing our union’s legal wins.

Members will be kept up to date with the outcome of the High Court Appeal.