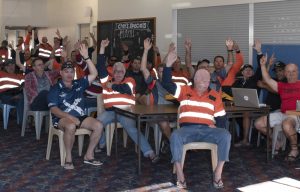 Members vote up the new agreement

Our members at Callide mine at Biloela have had a big win for job security, negotiating a new Enterprise Agreement that guarantees permanent job numbers.

“(Mine operator) Batchfire haven’t employed a permanent in a long time. Any time someone retires or resigns they are replaced by labour hire.”

Over the course of the last Enterprise Agreement, permanent production numbers fell from 245 to 223 through natural attrition.

The new EA, which has been unanimously endorsed and is awaiting approval by the Fair Work Commission, guarantees 240 permanent jobs in production and 105 jobs in maintenance.

“Once it’s ratified, we are getting those new jobs,” said Rick.

“It’s a good thing for some of the labour hire workers who have been here six to eight years. It provides some hope for them to know there’s an opportunity to apply, that will be a great thing.” 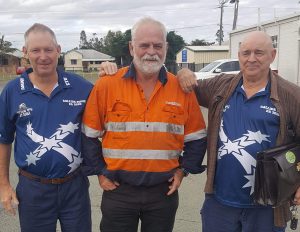 Queensland Senior Vice President Mitch Hughes, who supported the Lodge during the marathon 15-month EA negotiations, said the new Callide agreement set a new industry standard for protecting job security. “It draws a line in the sand on replacement of permanent jobs.”

He said negotiations were successful because workers were ready and willing to walk off the job, with near-unanimous support for strike action. They also had the support of labour hire workers with more joining the union during the campaign.

“Our message was we are not just fighting for our own conditions, we are fighting for the labour hire workers too. As soon as we said we’d go out the gate for their benefit as well, people joined.”

In the end, Callide workers won the conditions they were fighting for without walking off the job – but their unity and determination was a wake-up call to the company, said Rick.

In addition to the permanent jobs guarantee, the new EA delivers a range of improved conditions including arbitration, a bigger say over rosters, redundancy protections and annual pay rises.

“We’ve never had arbitration before so that gives us important backing when disputes come up. It is a comprehensive agreement that is a testament to the unity and determination of our members,” said Rick.