Five members sacked by WorkPac at South32’s Appin underground mine have had an important legal win, with the Fair Work Commission finding their redundancies were not fair or genuine.

South West District Vice President Bob Timbs said the ruling sent a clear message to labour hire companies that they need to consult about changes and redeploy workers where possible, before cutting jobs.

“Labour hire companies can’t just hide behind the excuse that ‘the mine operator made me do it.’ They have obligations to their employees,” he said.

Last June, WorkPac made 25 workers (including the five unfair dismissal applicants) redundant on a development contract at Appin managed by another contracting company, PIMS.

At the same time, WorkPac was negotiating a new supplementary labour contract with South32, to provide 90 mineworkers.

WorkPac submitted names of the redundant workers to South32 for consideration for the new contract, but they were rejected.

In an initial ruling and subsequent rejection of an appeal by WorkPac, the Fair Work Commission found that making 25 of 85 workers employed on the PIMS development contract was a major change that required consultation.

The Commission also found the practice of WorkPac submitting names of displaced workers to South32 for them to accept or reject was not compliant with the Fair Work Act. Those workers made redundant from the PIMS job who were suitable for the new contract should have been automatically redeployed and not made to compete for the new positions at South32’s whim.

One of the affected mineworkers, Nathan Calder, said it was a fantastic decision. He said it had been stressful and demoralising for the workers to be made redundant at short notice when there was no issue with their performance and similarly skilled workers were being employed elsewhere in the mine. 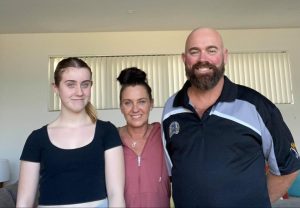 Nathan Calder with his wife Tracey and daughter Hannah

“It’s a really good win. These labour hire companies have got to consult more with the workers. It’s not enough to say ‘you’re redundant, that’s the end of it’.

“They can’t just say they’ll try and find you a job but not do it.”

National Office lawyer Adam Walkaden, who ran the case, said it was important win for labour hire workers in the coal industry because the Fair Work Commission rejected WorkPac’s argument that its lack of control over its own employees – which is a central feature of the toxic labour hire employment model in the coal industry – meant that it didn’t have to consult and redeploy the retrenched mineworkers.

‘’It’s important to reinforce that labour hire companies don’t operate outside of the law – they can’t simply avoid consulting with workers and making serious efforts to redeploy retrenched mineworkers by claiming they are the middle-man with no control over their own employees.”

Nathan thanked Adam and District officials Bob Timbs and Andy Davey for their commitment and determination in running the successful case.

The members involved are now eligible for compensation up to the maximum of 26 weeks pay, which is still to be determined.