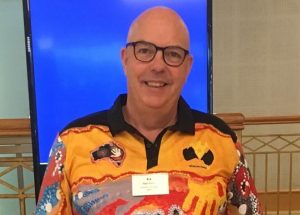 Long-term activist Nigel Gould is hoping to be the first member of our union to feature in the prestigious Archibald portrait prize.

He’s had his first sitting with Victorian artist Kaye Levannais for a portrait intended to capture his character, his mining experience and his commitment to making the world a better place.

Nigel’s mining career has taken him around the country from far north Queensland to western New South Wales to remote Northern-Western Australia.

While he is paid to operate giant high-tech machines, his real vocation is building and supporting the communities around him – whether through charity fundraising, political activism or standing up for the rights and conditions of his workmates.

A long-time Mining and Energy Union member, Nigel comes from the tradition of union activists who have fought to make sure that the communities that host mining operations aren’t left behind.

His first job in the mining industry was in Weipa on Queensland’s Cape York Peninsula where Rio Tinto (then CRA) runs a large operation mining bauxite, a key ingredient in aluminium.

Two of the five children he has with wife Christine were born in the tropical mining town and his family saw firsthand how important it was for the remote community to have access to medical facilities.
In two separate medical emergencies, his wife Christine and baby daughter Melanie each needed to be transported to Cairns for treatment by the Royal Flying Doctor Service aircraft.

Out of gratitude – and noticing the RFDS aircraft could do with an upgrade – Nigel with a group of mates established a fundraising tradition that would win them international acclaim.

Nigel and his group of mates established Weipa’s ‘Running of the Bulls’ – a nude 2km charity fun run in the dead of night – which started small in 1993 and turned into a world-renowned event over eight years, raising thousands in donations each year. The Running of the Bulls committee earned recognition in Australia Day Awards, being recognised as the best charity organisation for the community.

Find out more about Nigel’s support for RFDS in this podcast:  https://open.spotify.com/episode/0He298EeQmYLTJLXuyU8x3

During his time at Weipa, Nigel was a union leader during the nationally significant industrial dispute over Rio Tinto’s aggressive attempt at deunionisation by moving workers onto individual contracts, which saw non-unionists paid more. It saw Nigel and others take to the water in a flotilla of tiny boats to stop the passage of giant ships carrying the valuable loads of bauxite. 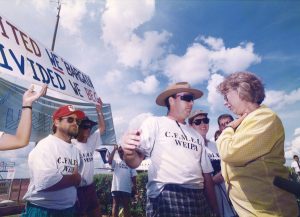 Nigel during the Weipa dispute

The victory of unionists at Weipa to establish the principle of equal pay for equal work and outlaw discrimination against union member is recognised to this day as a game-changer for working people’s right to organise.

Since then, there haven’t been many dull moments in Nigel’s life! He has run for Federal parliament twice winning a 10% swing against the incumbent, fought and won an important test case over superannuation while working for a building contractor and has been nominated to represent employees on the Rio Tinto Superannuation Fund Trustee Board.

He famously earned his nickname, ‘Honest’ Nigel Gould, over events that hit the front pages in 2004. While at work at a waste transfer station in Brisbane, he found a leather bag discarded in the garbage. It was stuffed with bills – at least $20,000.

When the distraught owners came looking for it, he handed back the bag with its contents completely intact. The newspapers branded him ‘honest’ Nigel and the nickname has stuck.
Having lived and worked around the country, Nigel has settled in Melbourne with Christine, travelling to and from Rio Tinto’s Yandicoogina iron ore mine near Newman in the Pilbara as a FIFO (Fly In Fly Out) miner.

His role is to travel around the pit overseeing the running of giant autonomous trucks.

He is also a ‘peer support’ officer to help workers struggling with mental health issues, which are rife in an industry which sees workers away from home living in camp accommodation for weeks on end. His experience in the FIFO industry, including its disturbing suicide rate, has driven his great passion for supporting Movember for men’s health.

Nigel will use his portrait to drive fundraising for the two causes closest to his heart, Movember and the Royal Flying Doctor Service.

You can donate to either of these great causes: 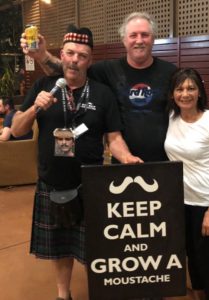