Near unanimous no vote sends clear message to BHP 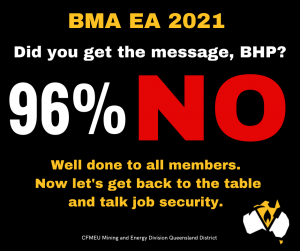 You can listen to part 2 of the extraordinary history of this Agreement in our latest podcast:

The combined unions’ bargaining team, which includes representatives from each site, has proposed measures including:

With growing threats to job security including increased automation and the growth of Operations Services, new measures in the Enterprise Agreement are proposed to strengthen job security of current employees and provide more pathways to permanency for labour hire workers.

Bargaining is also underway for new Operations Services Enterprise agreements and OS workers can get an update at ThinkFairBHP.org.au.