The Western Mineworkers Alliance (WMWA) – our joint venture with the Australian Workers Union to cover iron ore miners in the Pilbara region – has called for a range of measures to ensure safer FIFO workplaces and camps including an independent body to assess harassment and abuse claims. 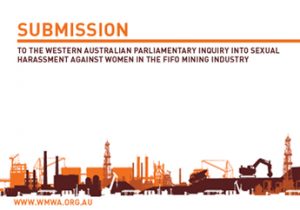 The WMWA made a submission to the Western Australian Parliament’s recently-established Inquiry into sexual harassment in the FIFO mining industry.

A survey conducted for the submission found that while women and men experienced sexual harassment, the rates for women were significantly higher.

Of respondents to the survey:

Despite these experiences, the majority of women and men are not confident managers understand the prevalence of sexual harassment on site and in camp. In addition to the industry-funded independent body to assess claims, the WMWA recommended measures including: 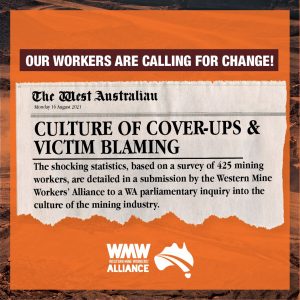 WA Secretary Greg Busson said it was time for mining employers to invest in improving security and facilities and hold managers to account for stamping out abuse.

“It’s great to see more women entering the mining industry, however mining companies have not backed them up by investing in practical support on the ground to protect safety and well-being.

“We will do everything we can to improve conditions for women and men in the mining industry and hold mining companies to account for delivering better and safer work environments.”