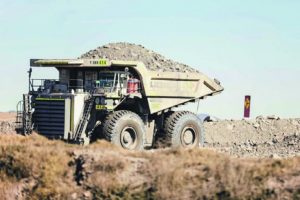 BHP has told 80 workers at its Mt Arthur coal mine at Muswellbrook they will lose their jobs if they don’t accept a transfer to central Queensland or remote South Australia at the beginning of November.

Our Union has taken BHP to the Fair Work Commission to defend the rights and jobs of the affected workers.

The workers are employed through BHP’s fully-owned labour hire subsidiary Operations Services (OS). BHP has announced that OS will no longer be deployed at Mt Arthur as of 1 November.

Northern Mining and NSW Energy Vice President Jeff Drayton said that BHP was full of rhetoric about OS workers being part of the team.

“These workers wear BHP shirts and do exactly the same work as other BHP employees at Mt Arthur. They were employed on the promise of being permanent BHP employees, but they are treated as second class citizens,” said Jeff.

“Now they are being told to take a job in the Central Queensland coal fields or a South Australian uranium mine – or resign. It’s incomprehensible that at a coal mine the size of Mt Arthur, BHP can’t simply move them on to the site Enterprise Agreement and continue their employment.”

Mt Arthur’s OS workforce is residential, meaning they live locally to the mine and return home at the end of every shift. BHP’s insistence that their only option to continue employment is to be transferred to an OS job interstate is completely unworkable – especially in the midst of a pandemic.

“BHP is suggesting that these workers either uproot their families from the Hunter Valley and move to regional Queensland; or commit to flying every week for work at their own expense while navigating hard border closures” said Jeff Drayton.

“It’s absurd. If BHP won’t do the right thing and give these workers the permanent EA job they deserve, they should at least admit these roles no longer exist and give them redundancy entitlements.”

A Fair Work Commission conciliation hearing was held earlier this month and the Union is considering further legal options to pursue redeployment and secure workers’ entitlements.

BHP claims it can transfer the OS workers to Central Queensland or South Australia because they are employed to work across an ‘East Coast Hub’ and not the Mt Arthur coal mine specifically.

Affected workers have told the union that BHP’s information about the proposed transfers and relocation support has been confusing and contradictory, creating the impression that BHP’s real agenda was to pressure them into resigning.

One worker who is a local Hunter Valley resident said he had settled his family locally for the Mt Arthur job and didn’t want to uproot them again.

“We were promised roses but got sold a lemon. When I took the job with OS, we were told this was a permanent job, that we weren’t going anywhere,” he said.

“Now we’ve been told the only jobs available are thousands of kilometres away and that’s just our bad luck.

“I’m very anxious about what happens to me come November. I wear a BHP shirt to work every day and I’m appealing to BHP to please keep us on as permanent mineworkers at Mt Arthur.”