‘Let’s move forward as one’: New Lodge takes on Yancoal 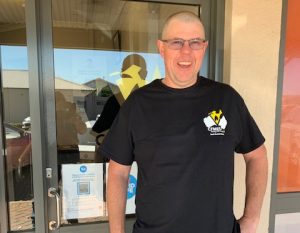 Coal miners at Moolarben underground mine in NSW have formed our union’s newest Lodge, with members determined to improve their below-standard pay and conditions.

The underground mine at the Moolarben complex near Mudgee in the western coalfields began operating in 2016, in addition to the existing open cut. Union Lodges are already in place at the open cut mine and washery. However when the underground mine was established, operator Yancoal struck a non-union Enterprise Agreement with a few hand-picked workers.

Since then, a determined organising campaign – helped along by hostile management – means the underground mine now has nearly 90% union density, with members establishing the new Moolarben Underground Lodge about six weeks ago.

Newly elected Lodge President Tony Dowler said that like many of the other coal miners on site, he hasn’t had much union experience in the past. But with a new Enterprise Agreement due, workers knew they wanted a better deal.

“Our pay rate was way behind others. We are $6 an hour behind Ashton with no entitlements,” said Tony.

“It has just been a matter of approaching people and giving them the option to join the union so we can start getting fairly treated and compensated.

“We said, ‘let’s move together as one’ and about 90% have taken that option.”

Moolarben workers have already voted down two proposed Enterprise Agreements put forward by the company – with strong no votes of 99% and 95%. They are now in the middle of a protected action ballot in preparation for an industrial campaign.

Members’ priorities include a better pay rate and bonus system, sick leave paid as at work and more certainty over rosters.

In less than four years at the mine, Tony has had his roster changed five times already. The latest roster change cut tens of thousands a year out of the pay packet of many workers due to a reduction in overtime.

“We produce twice as much coal with half as many blokes. We are working flat out in wet conditions.

“The seam itself is very good strata but to manage the water when you’re cutting the coal is extremely difficult. As soon as you start cutting coal the water pours in … my workmates are getting drenched every shift. You get water through your gum boots.

“It’s a tough job and we just want fair compensation and treatment.”

Yancoal appears worried about the prospect of industrial action at the underground mine. Contractor PIMS has started advertising jobs at Moolarben underground and mine deputies are being trained to cut coal.

“It looks like they are trying to lock in an alternative workforce in preparation for our members taking protected industrial action,” said South Western District Vice President Craig Carberry.

“If the company is worried, that’s good. They know the workforce is united and willing to fight for the pay and conditions they deserve.

“Members at Moolarben Underground can be reassured that they have the support of our whole union behind them.

“Standing together through the union and being willing to take on the company is the only way for mineworkers to get a better deal. With a new Lodge in place, I have every confidence that our members are up to this challenge.”