Fury at failure to prosecute over Grosvenor blast

Queensland coal miners are angry at the decision announced today that no charges will be laid over the May 2020 Grosvenor underground mine explosion that left five workers seriously injured and many more traumatised.

District President Steve Smyth said the findings of the Queensland Coal Mining Board of Inquiry were damning of the mine’s management and the Workplace Health and Safety Prosecutor should act. 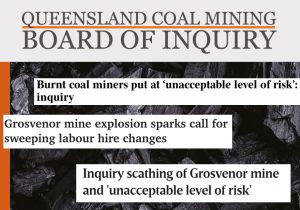 “I am personally devastated at this decision, having worked very closely with the Grosvenor miners as they have recovered from the explosion and dealt with the fallout,” said Steve.

“I know that workers across our industry, especially those at Grosvenor mine who have just this week restarted longwall production, are angry.

“In an environment where our members get sacked for minor policy breaches, it’s deeply unfair that a management team that oversaw a mine blowing up should face no consequences whatsoever.

“The Board of Inquiry report outlined the mine’s repeated failure to drain dangerous gases in pace with production. Risk assessments required to control spontaneous combustion in longwall 104 was not undertaken and mining should not have occurred.”

The inquiry heard of 14 potential incidents of methane exceedance were recorded at longwall 104, where the explosion occurred, in the eight weeks leading up the explosion.

“The report painted a picture of an accident waiting to happen. It was a foreseeable event and no action was taken to protect the miners at Grosvenor.

“Mineworkers put their lives on the line every day and they deserve to know that the people responsible for their safety will be held accountable for meeting their obligations. 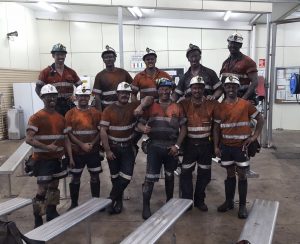 “We have workplace health and safety laws that provide for prosecution where negligence leads to serious injury or death.

“These laws are of no use if the government is too scared to use them against mining companies like Anglo.

“In the strongest possible terms, we urge the Office of the Workplace Health and Safety Prosecutor to review this decision.”

Since the explosion occurred, Grosvenor workers have formed a union lodge which means they will have a stronger unified voice when it comes to safety, rostering, pay and other issues.

Grosvenor underground mine is operated by Anglo American but the production workforce is outsourced to labour hire company One Key.