Dan and Russell ready to give coal miners a voice 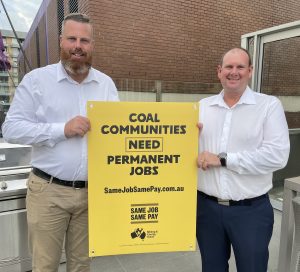 We have been proud to support two of our members running for Parliament this federal election campaign – Russell Robertson in Capricornia and Dan Repacholi in Hunter. Having Dan and Russell in Parliament would give coal miners and coal mining communities the strong voice they need in Canberra.

If you have followed their campaigns, you would know that both Russell and Dan have had a gruelling few months, with long hours on the road and time away from their families.

Russell has campaigned the length and breadth of his enormous 90,000 square kilometre electorate, which stretches from Rockhampton all the way up to Collinsville in the North and out past Clermont to the west. That adds up to a lot of hours in the car to attend events and meet voters!

Russell is a working Bowen Basin coal miner who has taken leave to run this campaign. As Russell explains in our latest podcast, he decided to run for Parliament because he saw first-hand during his time as a union delegate that the system was stacked against workers. Russell has seen how mining companies have used strategies like casualisation to aggressively cut wages and weaken workers’ bargaining power. He knows that we need better laws for workers to get a fair go. 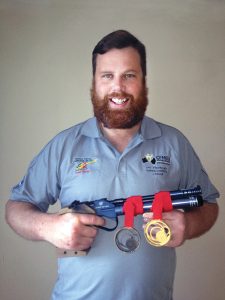 Olympic shooter Dan Repacholi is a fitter by trade and moved to the Hunter Valley to enter the coal industry. Dan worked at Mt Thorley Warkworth Lodge where he became an active member of the Lodge. Dan received plenty of support from his workmates and the union during his Olympic and Commonwealth campaigns and we all delighted in his medal success.

We’re also proud to back him during this election campaign because we know that he’ll be a strong voice for coal workers and communities. Dan has attended as many union Lodge meetings as possible during this campaign to answer questions and address member concerns. He understands how important good, secure coal mining jobs for the industry and he’ll stand up for them.

The Australian Labor Party was formed when Australian workers realised that they couldn’t win against employers on industrial strength alone. They also needed a political voice.

One of the important events that led to the ALP’s formation was the Great Shearers Strike of 1891 in outback Queensland. Shearers were striking against landowners’ push to make them sign a ‘contract of free labour’ – that is, a contract meaning they could ignore union pay and conditions. The striking shearers were ultimately unable to hold out against the landowners who were backed by police.

Just like the shearers, we can’t tackle this unfair wage-cutting strategy on industrial strength alone. We have had some success through the courts, but our wins have been overturned by hostile Liberal National and One Nation politicians.

We need strong advocates in Canberra for secure jobs with entitlements and for workers’ voices to be heard as we navigate the global economic changes ahead.

I can’t think of anyone better to represent mining and energy workers than Dan Repacholi and Russell Robertson. I look forward to seeing them in Parliament and I thank them on behalf of the union for the incredible effort they’ve put in over the last weeks and months. 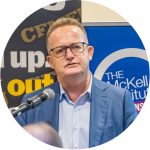