These legends stayed underground for 55 days in a sit-in strike in a fight to save their jobs, back in 1983. 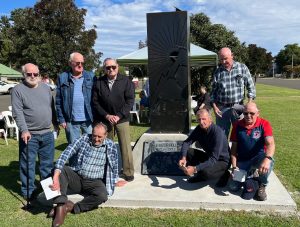 Some members attended the sit-in strike at the monument unveiling.

The Mineworkers Trust and our Northern Mining and NSW Energy District funded this wonderful monument to the Preston sit-in strike, which was unveiled in May in the village of Curlewis near Gunnedah.

The protest began when the RW Miller Preston Extended Colliery sacked 83 of its 106 mineworkers with no warning. Sixteen miners began a ‘sit-in’ strike in the underground mine, although two had to return to the surface for urgent medical and family reasons.

Their action persuaded the NSW Government to take action on the orderly development of the coal industry and the retention of coal jobs through the restructure of the Joint Coal Board. Fifty-three of the sacked workers got their jobs back.

We spoke to Geoff Rose, one of the workers who was part of the sit-in strike, about his experience.

Q: What was your experience taking part in sit-in and being underground for 55 days?

A: One of the first challenges was that one of the Managers from the Head Office told us that RW Miller was threatening to turn off the fans, which would mean that there wouldn’t be any air going down the drift. The Union, as well as other unions stood up for us and made demands to RW Miller to keep the air on, and the community got behind us which meant that we would have air and power while being underground.

After that, the first couple of weeks were alright, although we were all missing our wives and kids as we hadn’t seen them in a while. Things improved when we were able to go to the mouth of the pit and we developed ways to communicate with our family.

When we were all able to, our wives would meet us at the top of the pit and give us sandwiches and tea and bring the kids to visit, which helped a lot. We even had people bring us hot water because there is only cold water in the mines to wash and shower in. We would get hot water from the mouth of the pit and walk the water into the pit and put the water into a makeshift shower.

We never left the pit, and no one from the outside ever came in, but the camaraderie was really there, and the community and our families got behind us.

Q: Being underground for 55 days had to be challenging. What did you all do to raise your spirits during tough or even mundane times?

A: We would do things like play card games. We played various games of solitaire and other games like scrabble. We would also go for two-to-three-kilometre walks in the mines, fixing the lights.

Something I do reflect on, is that I was in my early thirties at the time, and there were some workers in there with us who were older. It must have been much tougher for them, but the thing that kept us all going is that we had the support from people outside.

Q: After the sit-in strike, what happened next?

A: We came out of the mine, and we got our jobs back. It took some time to adjust to normal life and some people even chose not to go back to those jobs. Some people called us heroes, but we weren’t heroes. We were just people who wanted our jobs back.

There were some people in the community who didn’t support what we did, although that was only a small number of people, and for some of the workers, I think that affected them. But after we got out, the Union organised an event for us. They put us all on a bus and took us to the Showgrounds and put on a big do, with all our wives, kids and the community. That really helped those people who were feeling unsure, and when we saw the event and all the people, we really a great sense of solidarity.

Q: What do you think of the monument?

A: I think it’s a great tribute to the people who were there. They were fighting hard. It’s good for people to know the struggle we went through because after we did that, the mine continued for another ten to twelve years and created employment for many people. I’m very proud of being a part of it, and I think it’s great that it’s being recognised.

Q: Do you still live in the area?

A: I live in Gunnedah which is around 20km into town. There are still a few people around from the sit-in strike who still live around here. I’m not planning on leaving.

Q: And finally, what advice would you give to mine workers today who are facing their own battles or adversity? Geoff is pictured sitting third from the left.