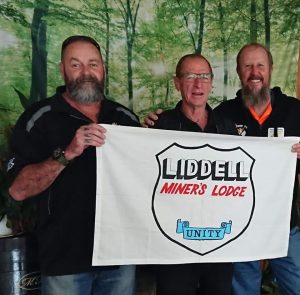 Scott is pictured on the left.

All the best to Scott Brittliffe on his well-deserved retirement. Scott is retiring from a long career in the Northern District coal industry and his role as President of the United Wambo Lodge.

Scott started out at Liddell Underground Mine in the 1980s aged 21 – he was doing some construction work at the mine and his Dad helped get him a start underground. Born and bred in Singleton, Scott’s father and brothers worked as coal miners too.
When the reserves ran out, he moved across to Liddell State Mine and later began his open cut mining career, which finally took him to Wambo with a rotation of employers along the way as mines changed hands.
Scott was always active in the union and was a long-term delegate before taking on the role of Lodge President about 10 years ago. He says the safety and conditions have improved significantly since he started – but only because of workers standing together through the Union and taking on the companies.
“We stuck together and fought for things and we got them. Nothing was ever just given to us, not at all,” he says.
Along with the hard but satisfying work of representing members day to day, Scott has enjoyed being involved in the union’s charity work – like the time in 2001 17 underground miners shaved their heads to fight children’s cancer; and supporting coal miners across the District in their industrial battles like supporting the 2019 picket line at Boggabri mine: “They thought they were on their own out the back of nowhere but we’re all in it together, it was important to show our support and help them keep morale up.”
Scott has been a committed mentor for a new generation of unionists at United Wambo and across the District and although we’ll miss him, we know he’ll keep fighting the good fight for mineworkers and his community.
All the best for your retirement, Scotty!