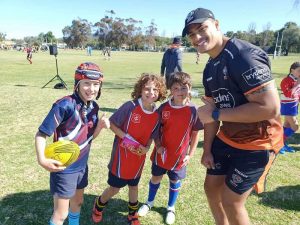 Over 280 kids from nine primary schools across the Gunnedah region in northern NSW gathered for a great day of rugby league competition at the annual Coalminers Cup Carnival in August.

The Coalminers Cup, established and sponsored by the Northern Mining and NSW Energy District, is a long-running tradition in Gunnedah now in its 23rd year.

The Cup is an important event to the local community in the Gunnedah region. Some schools in the local area are very small, with only 10 to 15 students. The Cup provides a fantastic opportunity for kids to socialise with their peers from around the region and build new connections and learn about sportsmanship.

It was a thrill for the kids to have Wests Tigers star Tommy Talau attend to answer the many questions put to him by the kids.

The kids had a great day out and formed memories for a lifetime according to event organiser Ross Whitaker, himself a former Greater Northern representative rugby league player.

The MEU has a proud history of bringing the community together in the Gunnedah region and we are proud to be continuing that tradition following some years when we were unable to hold the event due to COVID-19.

We send our thanks to the sponsors of the event, including the MEU Northern Mining and NSW Energy District, Unity Bank, Mine Super, Boggabri and Namoi Valley Lodges.