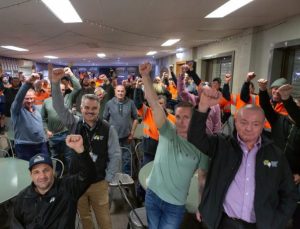 Members at Yallourn coal mine have established an important industry standard for redundancy entitlements and won a 16% pay rise after two months of industrial action.

Their new, substantially improved Enterprise Agreement was voted up on Friday with near unanimous support.

Initially, members were offered a 0% pay increase over the four years if any gains were to be made in an increase in redundancy, but members weren’t having any of it.

Workers organised and took industrial action around the clock, including refusing supervisory roles which meant that senior management got a taste of what life is like as a 24/7 shift worker by getting called to work at 2:00am.

However, our members stuck together and won.

Victorian District Secretary Mark Richards said members were incredibly pleased with the overwhelming support for the new Enterprise Agreement. He said that bringing RTL back to the table with a much better offer in hand was a hard slog, but it was a great achievement.

The new Agreement provides for 16% pay rise over four years and a range of improved entitlements, including backdated seasonal workers’ severance pay (which applies to casuals), higher duties allowance, tool allowance and more.

Most importantly, the new Agreement contains improved redundancy provisions. This is a pressing issue for members as the closure date of the site was recently brought forward by four years to 2028. Yallourn coal mine exclusively supplies the power station, and uncertainty in the industry means the closure date could be brought even further forward.

Redundancy provisions are now comparable, with the new Agreement increasing entitlements to four weeks per year of service capped at a maximum of 104 weeks. Employees are now automatically entitled to 12 weeks redundancy from the day they start, up until three years of service.

Mark Richards said the new provision established a new industry standard of four weeks per year of service, which was an important victory for workers affected by energy transition.

“Congratulations to our members at Yallourn. They didn’t back down and their collective show of strength has delivered fantastic results.

“They are proud to be part of a union that is supporting the fight for a coal mining and power redundancy industry standard, that should be an essential part of a national energy transition policy.

“The backing of our national legal team was essential with lawyer Alister Kentish providing expert support and advice.

“This is a great example of what workers can achieve when they are united and willing to take action.”