In the 2022 Federal Election, with the support of the Mining and Energy Union I stood to be the Federal Member for Hunter. I was incredibly grateful to have been elected by my community in May, and I have been your representative now for around six months.

One of the reasons I stood to be your representative was because I wanted to raise the issues that matter to mining and energy workers in our federal parliament.

I wanted to update you on the Government’s progress on industrial relations laws, as well as how we’re continuing to chart the course for Same Job Same Pay, which we campaigned on together during the election.

The week, Workplace Relations Minister Tony Burke introduced the Secure Jobs, Better Pay Bill into the Australian Parliament. The Bill includes a suite of measures designed to help workers across Australia negotiate higher pay packets and better conditions including multi-employer bargaining and prevention of employers terminating enterprise agreement during bargaining. The Bill delivers on our election commitments as well as some of the measures outlines by the Jobs and Skills Summit in September.

The Bill includes banning pay secrecy clauses, which means that companies cannot prevent their staff from discussing salaries. This will be significant for many mine workers who work on individual contracts which contain pay secrecy clauses, or those who work for companies that foster a hush hush culture around the discussion of pay. If we’re going to ensure that all workers are paid fairly and equitably, it is essential that we can talk about it, which is why this measure is so important. The Government is working towards the laws being passed before the end of the year. 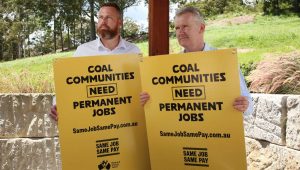 I am proud to be a former coalminer and I’m bloody proud of my electorate’s mining history. We need jobs that are well paid and secure and aren’t dominated by dodgy labour-hire arrangements. Put simply, whenever you work, if you’re doing the same job as the person next to you, you should be paid the same—same job, same pay. It’s simple.

During the election campaign, I was fortunate enough to speak to many of you, whether that be at your worksite or at a Lodge meeting about our Same Job Same Pay campaign.

We have all seen how mining companies have increasingly used labour hire arrangements to undercut the pay and conditions we have fought for in our union-negotiated enterprise agreements. This is why we need Same Job Same Pay legislation. I am confident that Same Job Same Pay will raise wages for thousands of labour hire workers and encourage more direct, permanent employment by some of Australia’s biggest companies.

We are already seeing the impact of our campaign and the Albanese Labor Government’s commitment to legislative Same Job Same Pay in its first year of Government.

At Grosvenor mine, 200 production workers were transferred out of their labour hire arrangements and into direct employment with the backing of the Mining and Energy Union. Make no mistake, this was in response to the Same Job Same Pay laws that are coming. Mining companies are starting to see the writing on the wall, and they’re getting prepared now.

But that’s why we need to make sure we get it right. Same Job Same Pay legislation must be designed very carefully to prevent avoidance strategies. It should apply to labour hire employees performing the same work as permanents, not to genuine specialist contractors, fully owned labour hire subsidiaries, workers at all pay levels and existing agreements without expectation.

The Government is undertaking a consultation process with employers and unions to make sure the legislation is workable and meets its intended purpose of stopping labour hire being used to undercut Enterprise Agreements.

I will continue to work with the Mining and Energy Union to hold the Government to account for delivering this commitment, and I will be at the table with you to work through the issues to make sure the new legislation is in a form that will boost wages and permanent jobs for mineworkers.