In a protected action ballot held during October, about nine out of ten members voted for a range of measures:

Miners at Saraji, Peak Downs, Goonyella Riverside and Blackwater mines showed strong support for action they are willing to take after BHP failed to make commitments to support permanent jobs.

This follows eighteen months of negotiations with BHP, including months of assisted negotiation meetings facilitated by the Fair Work Commission.

“We have attempted to bargain in good faith with BHP on the key claims that are important to members, but we felt that there was not enough progress made, which is why we put a vote to members about what industrial action they would be willing to take to get a better deal” said Stephen Smyth, Queensland District President.

“They’re not willing to settle for hollow promises anymore. They want hard protection built into the agreement around EA job numbers, redundancy protections and career progression.”

MEU bargaining representatives have been pushing for ‘one for one’ where site EA jobs are replaced with another job in the same area, as well as protections to stop permanent jobs being replaced by other contractors.

MEU bargaining representatives have also been pushing to ensure that BHP maintains a multi-skilled workforce paid a consistent rate, due to concerns that workers’ skills acquired are not reflected in pay rates.

The next step will be to engage with Lodges and Members and develop an effective plan for protected industrial action to achieve a fairer Enterprise Agreement that recognises the value of job security. The strong ballot result means there is a range of options available. 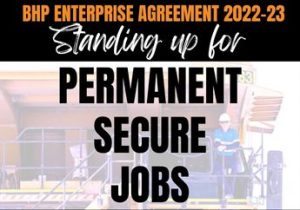