More women are now entering the mining industry, but mining companies’ actions to support women often don’t match their rhetoric about gender equality. That’s why it’s important for women mineworkers to have the support of their union in the fight for fair and safe working conditions.

We are proud to have witnessed increasing activism of our female members across our Union nationally, with women taking up roles as shift delegates, safety inspectors and Lodge executives.

The Queensland Women’s Conference was led by Jenna Saunders, Blackwater No.1 Lodge Secretary and Trudy Helsham, a coal miner and union activist at Moorvale Mine.

Jenna said she was proud to be part of the event: “I’m excited about the future of the MEU and the direction we’re going in, and I’m proud that the MEU helped us put the Conference together. Being from a smaller work site, seeing so many members at once was great.” 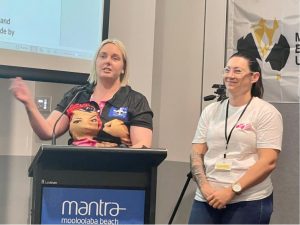 Trudy said the two days was rewarding for everyone involved. “What I really loved seeing was the support the ladies were giving each other, and it was great that the MEU helped us put something like this together with amazing speakers, valuable information. and constructive debate.”

While the Conference had some exciting and sometimes light-hearted moments, challenging issues were also discussed including fighting against stereotypes, gender inequality in superannuation, as well as sexual harassment.
“We’ve come a long way together, but when we had discussions about some work sites still not having female toilets, it makes me realise that we still have a lot to do, even in 2022,” said Trudy.

“However, overall, it was great to see everyone come together. It’s not just women’s issues but it’s issues for everyone, and the MEU supports a range of causes, including the Uluru Statement from the Heart which we discussed on one the days. I feel positive about the future, and I’m excited that we’re bringing everyone along on the journey.”

The Conference was well received by attendees and members who attended reflected on how informative and engaging the speakers were, the opportunity to meet other like-minded women and the overall feeling of unity.