Peabody moves to tear up EA 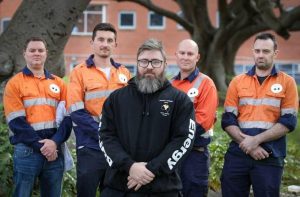 The application came ahead of today’s introduction of a new IR bill which includes measures to prevent employers terminating Enterprise Agreements during bargaining.

South-West District Vice President Bob Timbs said Peabody’s application to terminate the agreement was the latest in a series of aggressive and disproportionate actions including an eight-week lockout in July and August after workers took just an hour and a half of protected industrial action.

Bargaining meetings are still scheduled and progress is continuing to be made towards a new agreement for wash plant employees.

“Our members at Metropolitan wash plant have been united and determined to protect conditions in their Enterprise Agreement relating to job security.

“Everyone in the industry has seen mining companies’ enthusiasm for cutting permanent jobs and replacing them with contractors. It’s entirely appropriate for mineworkers to seek to bolster their job security through bargaining.

“Members have rejected Peabody’s offers for agreements which seek to strip important conditions while offering pay increases that fall well behind the cost of living.

“Peabody’s application to terminate the Enterprise Agreement is premature because Peabody and the MEU are still participating in a Fair Work Commission process under s.240 of the Fair Work Act to resolve the bargaining dispute.

“Peabody should get serious about resolving the dispute with the assistance of the Commission rather than seeking to beat the legislative clock by trying to tear up the Enterprise Agreement.

“This behaviour undermines bargaining and we need stronger workplace laws to prevent it from happening.”

MEU delegate Ryan Kelly said workers at the wash plant were trying to protect existing job security provisions in their Enterprise Agreement to prevent permanent employees from being converted to labour hire.

“We are not asking for anything new; we just want to maintain our job security protections which production workers in the pit also have in their agreement.

“Instead, Peabody is trying to substantially reduce our conditions while only offering a 2% pay rise. Workers have unanimously rejected previous offers and now rather than working with us, Peabody wants to tear up our agreement. It seems like the system is stacked against us.”