50 years of struggle; and how the ‘bucket shop dog’ got off its leash

Past and present members of our Peak Downs Lodge gathered in Moranbah earlier this month to celebrate the 50th anniversary of the formation of the Lodge – and a stick-figure dog that went viral before the internet.

Guest speaker and former Lodge President Terry Low reflected on the militant history of the Lodge, with members willing to ‘hit the grass’ as long and often as needed to fight for the issues that mattered to workers and communities. Some of the big strikes in the Lodge’s history were over provision of company housing, apprentices and equalisation of rates.

However the election of John Howard ushered in harsher workplace laws that made it much harder for unions to take strike action.

Terry Low’s predecessor Marty Crane also attended the celebration at the Miners Rugby Club. He said the Lodge had always stood up for the whole community. The 1980s dispute over housing was just as focused on maintaining company housing for teachers, nurses and police as for mineworkers. “It’s great to see the union is still going strong,” Marty said. “In Moranbah it’s still part of the town – otherwise we’d be stuffed. Companies don’t care about workers.”

Current Lodge President Danny Kliese said the Lodge had taken lengthy periods of strike action over decades to build a strong foundation of rights and conditions. But the enormous profits at stake and legal restrictions on union activity meant times were very different than 1972, when the Lodge was formed. The Lodge operates differently now but remains strong and determined.

Members wore commemorative shirts for the anniversary event, featuring the ‘bucket shop dog’ which has become a symbol of Peak Downs miners’ tenacity and humour over decades.

Long-term member Peter Freeleagus told the story of the stick-figure dog, which went viral in the 1980s after a chain of supervisors phoned each other to question how a boiler-maker on the workshop floor was using his time.

The boiler-maker in question calculated the cost of the time spent by each supervisor and manager along the chain calling each other to question his use of time. He wrote his calculation chalk in the massive bucket in the workshop (confirmed to be correct), with his superintendent calling him a ‘dog-f**ker’ for his effort. The boilermaker then drew a stick figure dog on the bucket.

Management made it known they didn’t like the dog, which guaranteed its popularity with workers. Images of the dog started turning up everywhere around site, around town and even around the world when Peak Downs workers travelled. The stick figure dog made its way into a BHP annual report, when it was on a piece of machinery photographed for the annual report.

Decades later, the Peak Downs ‘bucket shop dog’ is an established part of Lodge folklore. As Peter Freeleagus said, the unleashing of the dog is a symbol of workers standing up for the respect they deserve.

After fifty years of struggle, the Peak Downs Lodge and all its members past and present have our full respect. 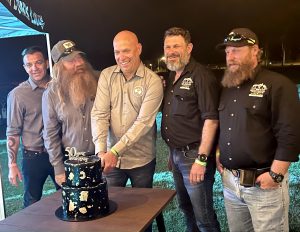